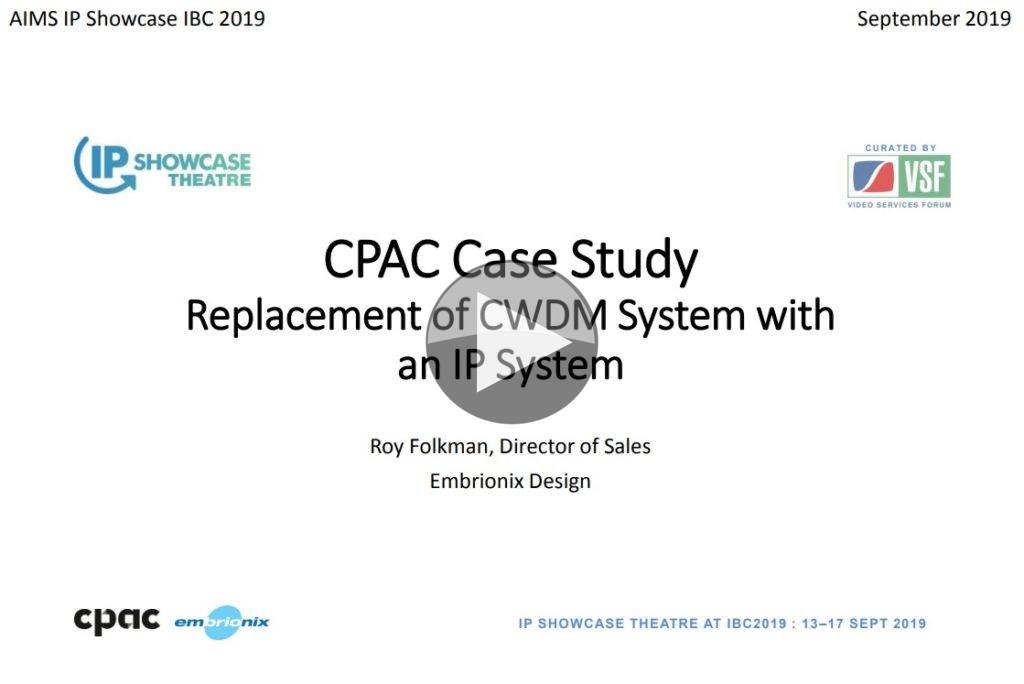 For a long time now, broadcasters have been using dark fibre and CWDM (Coarse Wavelength Division Multiplexing) for transmission of multiple SDI feeds to and from remote sites. As an analogue process, WDM is based on a concept called Frequency Division Multiplexing (FDM). The bandwidth of a fibre is divided into multiple channels and each channel occupies a part of the large frequency spectrum. Each channel operates at a different frequency and at a different optical wavelength. All these wavelengths (i.e., colours) of laser light are combined and de-combined using a passive prism and optical filters.

In this presentation Roy Folkman from Embrionix shows what advantages can be achieved by moving from CWDM technology to real-time media-over-IP system. The recent project for CPAC (Cable Public Affairs Channel) in Canada has been used as an example. The scope of this project was to replace an aging CWDM system connecting government buildings and CPAC Studios which could carry 8 SDI signals in each direction with a single dark fibre pair. The first idea was to use a newer CWDM system which would allow up to 18 SDI signals, but quite quickly it became apparent that an IP system could be implemented at similar cost.

As this was an SDI replacement, SMPTE ST 2022-6 was used in this project with a upgrade path to ST 2110 possible. Roy explains that, from CPAC point of view, using ST 2022-6 was a comfortable first step into real-time media-over-IP which allowed for cost reduction and simplification (no PTP generation and distribution required, re-use of existing SDI frame syncs and routing with audio breakaway capability). The benefits of using IP were: increased capacity, integrated routing (in-band control) and ease of future expansion.

A single 1RU 48-port switch on each side and a single dark fibre pair gave the system a capacity of 48 HD SDI signals in each direction. SFP gateways with small Embronix enclosures have been used to convert SDI outs of cameras to IP fibre – that also allowed to extend the distance between the cameras and the switch above SDI cabling limit of 100 meters. SFP gateway modules converting IP to SDI have been installed directly in the switches in both sites.