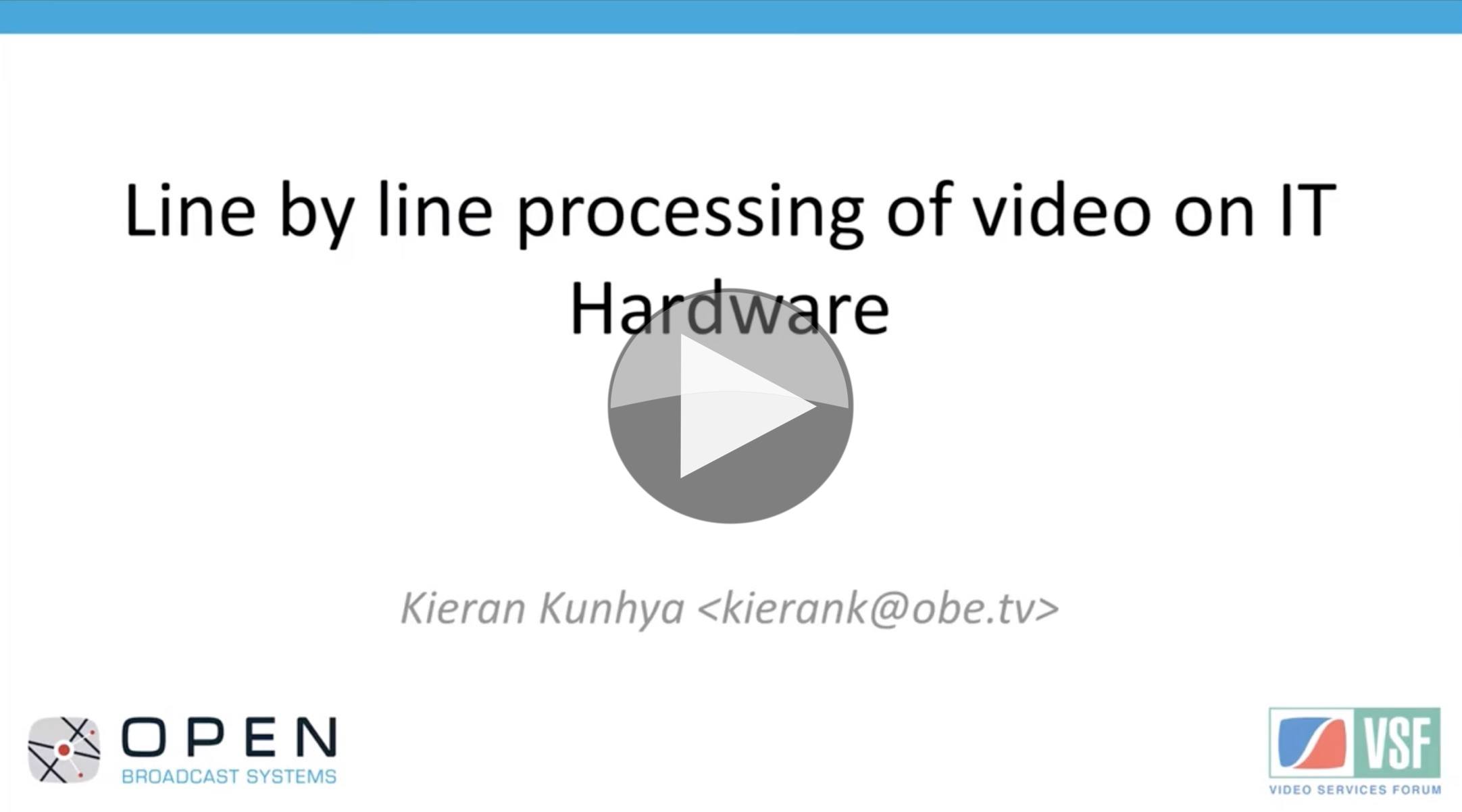 If the tyranny of frame buffers is let to continue, line-latency I/O is rendered impossible without increasing frame-rate to 60fps or, preferably, beyond. In SDI, hardware was able to process video line-by-line. Now, with uncompressed SDI, is the same possible with IT hardware?

Kieran Kunhya from Open Broadcast Systems explains how he has been able to develop line-latency video I/O with SMPTE 2110, how he’s coupled that with low-latency AVC and HEVC encoding and the challenges his company has had to overcome.

The commercial drivers are fairly well known for reducing the latency. Firstly, for standard 1080i50, typically treated as 25fps, if you have a single frame buffer, you are treated to a 40ms delay. If you need multiple buffers for a workflow, this soon stacks up so whatever the latency of your codec – uncompressed or JPEG XS, for example – the latency will be far above it. In today’s covid world, companies are looking for cutting the latency so people can work remotely. This has only intensified the interest that was already there for the purposes of remote production (REMIs) in having low-latency feeds. In the Covid world, low latency allows full engagement in conversations which is vital for news anchors to conduct interviews as well as they would in person.

IP, itself, has come into its own during recent times where there has been no-one around to move an SDI cable, being able to log in and scale up, or down, SMPTE ST 2110 infrastructure remotely is a major benefit. IT equipment has been shown to be fairly resilient to supply chain disruption during the pandemic, says Kieran, due to the industry being larger and being used to scaling up.

Kieran’s approach to receiving ST 2110 deals in chunks of 5 to 10 lines. This gives you time to process the last few lines whilst you are waiting for the next to arrive. This processing can be de-encapsulation, processing the pixel values to translate to another format or to modify the values to key on graphics.

As the world is focussed on delivering in and out of unusual and residential places, low-bitrate is the name of the game. So Kieran looks at low-latency HEVC/AVC encoding as part of an example workflow which takes in ST 2110 video at the broadcaster and encodes to MPEG to deliver to the home. In the home, the video is likely to be decoded natively on a computer, but Kieran shows an SDI card which can be used to deliver in traditional baseband if necessary.

Kieran talks about the dos and don’ts of encoding and decoding with AVC and HEVC with low latency targetting an end-to-end budget of 100ms. The name of the game is to avoid waiting for whole frames, so refreshing the screen with I-frame information in small slices, is one way of keeping the decoder supplied with fresh information without having to take the full-frame hit of 40ms (for 1080i50). Audio is best sent uncompressed to ensure its latency is lower than that of the video.

Decoding requires carefully handling the slice boundaries, ensuring deblocking i used so there are no artefacts seen. Compressed video is often not PTP locked which does mean that delivery into most ST 2110 infrastructures requires frame synchronising and resampling audio.

Kieran foresees increasing use of 2110 to MPEG Transport Stream back to 2110 workflows during the pandemic and finishes by discussing the tradeoffs in delivering during Covid.