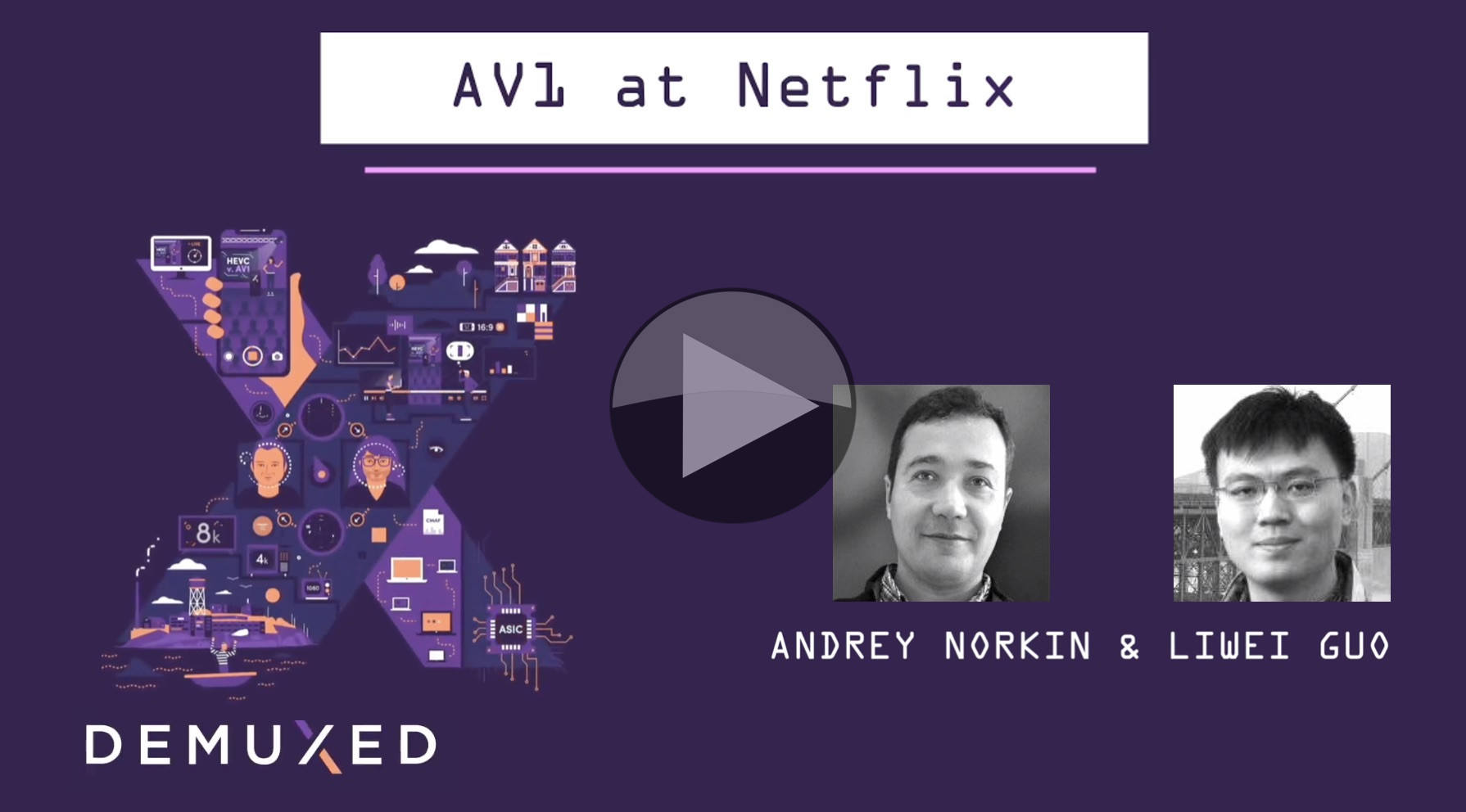 Netflix have continually been pushing forward video compression and analysis because their assets are played so many times that every bit saved is real money saved. VMAF is a great example of Netflix’s desire to push the state of the art forward. Developed by Netflix and two universities, this new objective metric allowed them to better evaluate the quality of videos using computer analysis and has continued to be the foundation of their work since.

One use of VMAF has been to verify the results of Netflix’s Per-Shot Encoding method which alters encoding parameters for each shot of the film rather than using a fixed set of parameters for the whole film. The Broadcast Knowledge has featured talks on their previous technique, per-title encoding (among others).

AV1, however must be the most famous innovation that Neflix is behind. A founding member of the Alliance for Open Media (AoM), Netflix saw a need a for a better codec and by making an open one, which also played to the needs of other internet giants such as Google, was a good way to create a vibrant community around it driving submissions to the codec itself but also, it is hoped, in the implementation and adoption.

In this two-part talk, LiWei Guo starts off by explaining the ways in which AV1 will be used by Netflix. Since this talk took place, Netflix has started streaming in AV1 to Android clients. LiWei points out that AV1 supports 10-bit video as standard – a notable difference from other codecs like AVC and HEVC. This allows Netflix to use 10-bit without worrying about decoder compatibility and he shows examples of skies and water which are significantly by the use of 10-bit.

Another feature of AV1 is the Film Grain synthesis which seeks to improve encoding efficiency by removing the random film grain of the source during the encode process then inserting a similar random noise on top to recreate the same look and feel. As anything random can’t be predicted, noise such of this is very wasteful for a codec to try and encode, therefore it’s not <a surprise that this can result in as much as a 30% reduction in bitrate. Before concluding, LiWei briefly explains per-shot encoding then shows data showing the overall improvements.

Andrey Norkin, also from Netflix explains their work with Intel on the SVT-AV1 software video encoder which leverages Intel’s SVT technology, a framework optimised for Xeon chips for video encoding and analysis. Netflix’s motivations are to further increase adoption by delivering a data centre-ready, optimised encoder and to create an AV1 encoder they can use to support their own internal research activities (did someone say AV2?). SVT allows for parallelisation, important for any computer nowadays with so many cores available.

Finishing up, Andrey points us to the Github repository, lets us know the development statement (as of November 2019) and looks at the speed increases that have taken off, comparing SVT-AV1 against the reference libaom encoder.