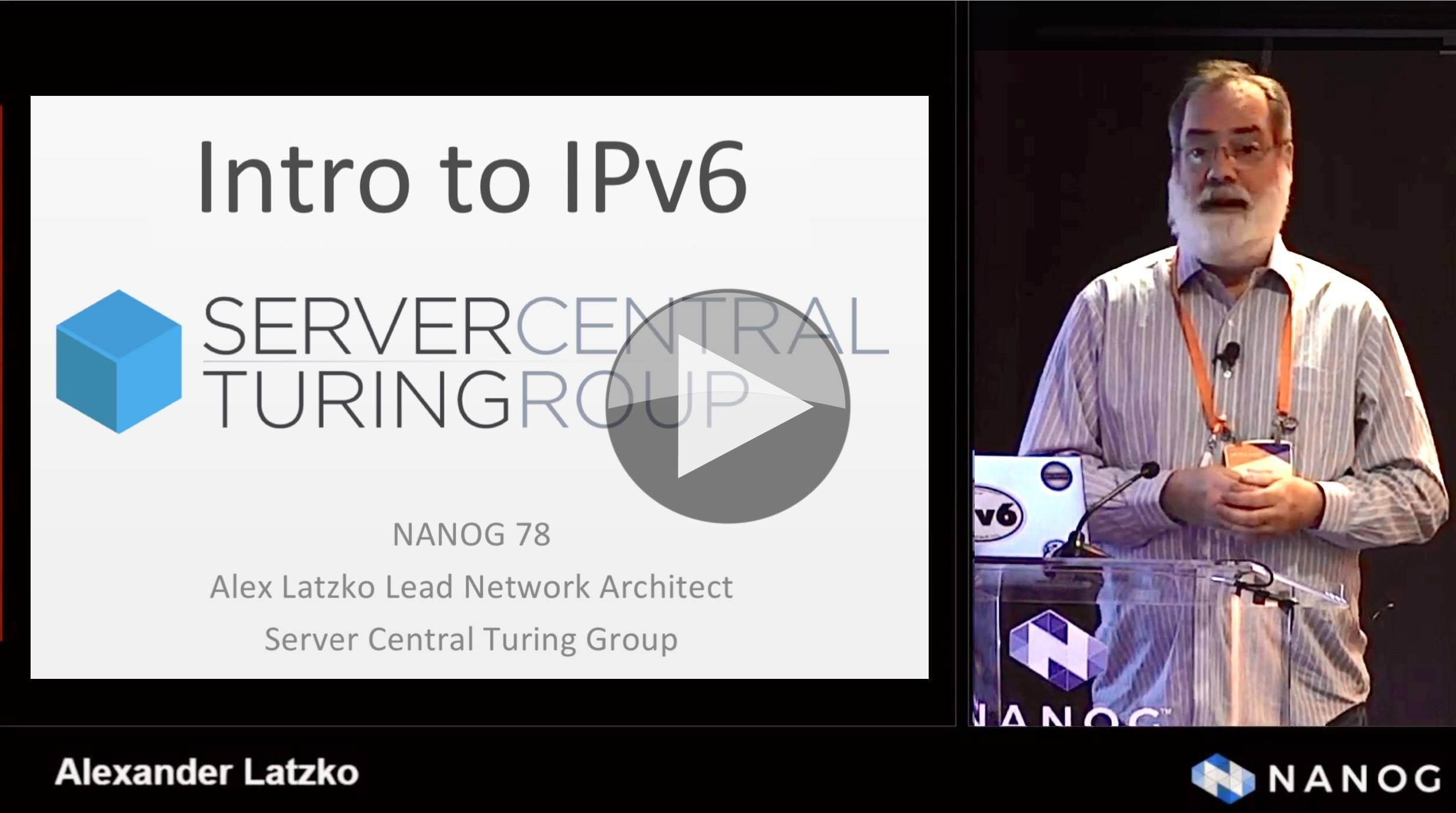 It’s certainly taken its time to get here, but IPv6 is increasingly used on the internet. Google now report that just under 30% of the traffic to Google is IPv6 and both Akamai and APNIC show UK IPv6 readiness at around 30% with the US around 50%. Deployment within most enterprise environments, however, is often non existant with many products in the broadcast sector not supporting it at all.

Alex Latzko is an IPv6 evangelist and stands before us to introduce those who are IPv4 savvy to IPv6. For those of us who learnt it once, this is an accessible refresher. Those new to the topic will be able to follow, too, if they have a decent grasp of IPv4. Depending on where you are in the broadcast chain, the impetus to understand IPv6 may be strong, so grab your copy of the slides and let’s watch.

There are no broadcast addresses in IPv6

Alex, from ServerCentral Turing Group starts by explaining IPv6 addresses. Familiar to some as a far-too-long mix of hexadecimal numbers and colons, Alex says this is a benefit given the vast range of numbers possible allowing much more flexibility in the way we use the IPv6 address space over IPv4. He takes us through the meanings of the addresses starting with well-known tricks like abbreviating runs of zeros with a double colon, but less well-known ones too, like how to embed IPv4 addresses within an IPv6 address as well as the prefixes for multicast traffic. Alex goes on to show the importance of MAC addresses in IPv6. EUI-64 is a building block used for IPv6 functions which creates a 64-bit string from the 48-bit MAC address. This then allows us to create the important ‘link local’ address.

The last half of the presentation starts with a look at the CIDR prefix lengths that are in use and, is some cases, agreed as standards on the internet at large and in customer networks. For instance, internet routing works on blocks of /48 or larger. Within customer networks, blocks are often /64.

In IPv6, ARP is no longer. ARP can’t work because it uses broadcast addresses which don’t exist within the IPV6 world. This gives rise to the Neighbour Discovery Protocol which allows you to do something very similar. Specifically, it allows you to find your neighbours, routers, detect duplicate addresses and more.

Alex covers whether ‘NAT’ is possible in IPv6 and then looks at how routing works. Starting by imploring us to use ‘proper hierarchy’, he explains that there is no need to conserve IPv6 space. In terms of routing, the landscape is varied in terms of protocols to use. RIP is out of the window, as v1 and v2 have no knowledge of IPv6, OPSFv3 is a beacon of hope, though deployment is often in parallel with the IPv6-ignorant OSPFv2. The good news is that IS-IS, as well as BGP, are perfectly happy with either.