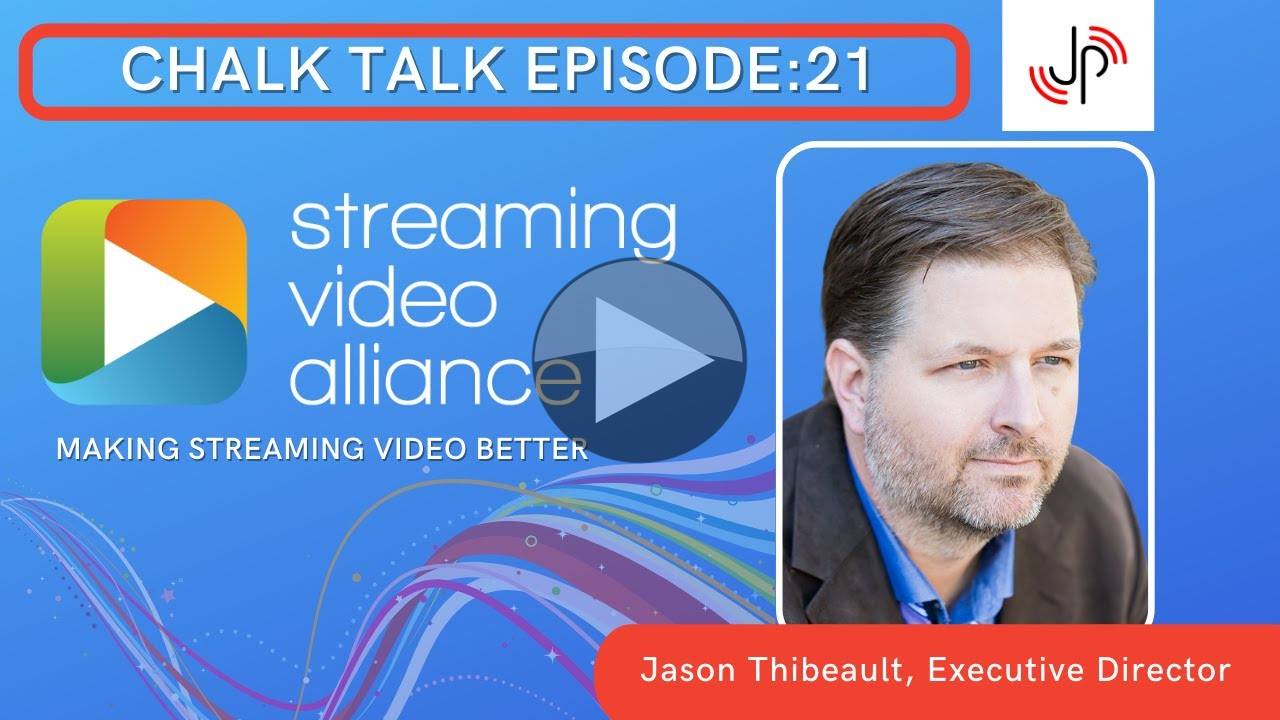 The streaming community is one of the most vibrant in the broadcast, media & entertainment with many examples of individuals and companies sharing knowledge and working together. The Streaming Video Alliance is a great example of this continued effort to ‘make streaming video better’, a group of, now, 90 companies that are working together to push the industry forward.

Streaming Video Alliance executive director, Jason Thibeault, discusses their work with John Porterfield on the JP’sChalkTalks YouTube channel. A technology consortium not unlike the VSF, AIMS, IABM or SMPTE, Jason says that the SVA doesn’t work on standards since the fast-paced iterations of the streaming industry don’t match the relatively long standardisation timelines. Naturally, that’s not to say streaming doesn’t need standards. SCTE 35 and 224 ad markers are vital to many workflows and the whole foundation from codecs to IT technologies such as HTTP and TCP is based on standards. But we see from the success of TCP and HTTP what the end game of the Streaming Video Alliance is. These standards laid down a way for any company to interoperate with another and now we don’t consider the possibility that a piece of networking kit speaking TCP won’t work with another. Jason explains that the key for the SVA is enabling interoperabiloty and removing vendor lock-in. This creates a healthier industry which is better for streaming providors and vendors.

John asks about how 2020 saw progress streaming. Jason explains that much of the growth seen due to the pandemic was actually the result of a lot of work that was already ongoing meaning that many companies were already working on scaling up for the future; the future came early. Going into the year, there was a lot of talk about low latency streaming, and there still is, but SVA members were cognisant of the fact they still couldn’t guarantee a consistent experience which they’d much prefer over low-latency. This reliability and resilience question deals with repeatability of experience and, for example, playback remaining stable in one ABR rung.

Jason looks ahead at 2021 talking about the work being produced by the alliance. Live streaming end-to-end best practice is being examined and will be released as a published document. Follow up validation in the lab of the recommendations is then planned with any learnings going back into the original document. Another piece of work is examining how new technologies out of the streaming industry can be adopted such as 5G and the push to the edge. Particularly in edge computing, there is a lot of potential which simply hasn’t been explored yet. On the interoperability theme, the group’s Open Caching guidance will continue to be expanded. Open caching opens the possibility of putting your cache in the edge. Jason asks where the boundary of the edge is as there is work ongoing examining pushing open caching out even to the smart TV.

The Streaming Video Alliance produces monthly webinars, many of which are covered here at The Broadcast Knowledge.