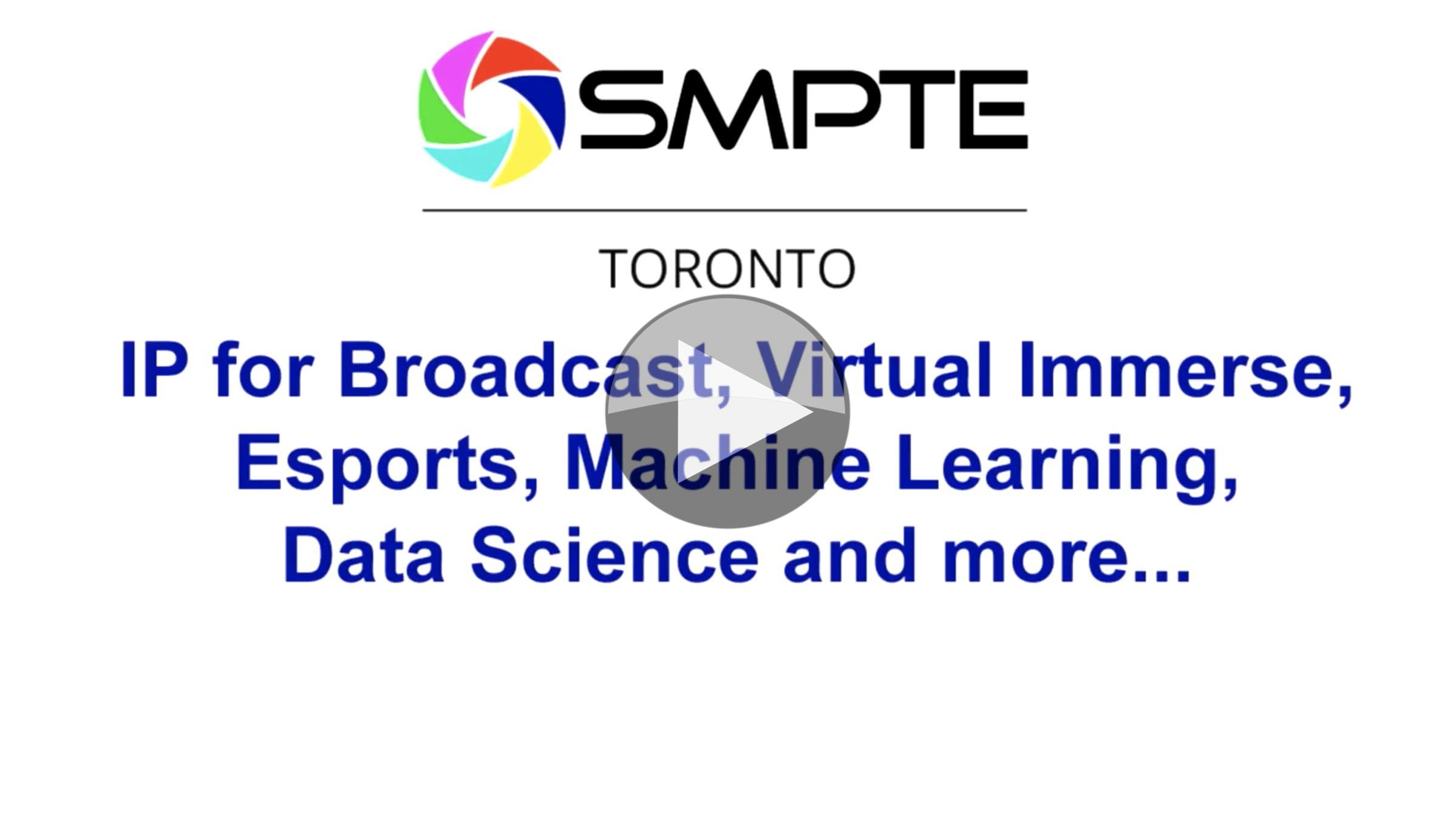 A wide range of topics today covering live virtual production, lenses, the reasons to move to IP, Esports careers and more. This is a recording of the SMPTE Toronto sections’ February meeting with guest speakers from Arista, Arri, TFO and Ross Video.

The first talk of the evening was from Ryan Morris of Arista talking about the importance of the move to IP. Those with an IP infrastructure have noticed that it’s easier to continue using their system during lockdown when access to the equipment itself is limited. While there will always be a need to move a 100Gbe fibre at some point or other, a running 2110 system easily allows new connections without needing SDI cables plugging up. This is down to IP’s ability to carry multiple signals, in both directions, down a single cable. A 100 gigabit fibre can carry 65 1080i59.94 signals, for instance which is in stark constrast to SDI cabling. Similarly when using an IP router, you can route thousands of flows in a few U of space where as a 1152×1152 SDI router takes up a whole rack.

Ryan moves to an overview of the protocols that make broadcast on IP networks possible starting with unicast, multicast and broadcast. The latter, he likens to a baby screaming. Multicast is like you talking to a group of friends. Multicast is the protocol used for audio, video and other essences when being sent over IP whether as part of SMPTE ST 2110 or ST 2022-6. And whilst it works well, the protocol managing it, IGMP, isn’t really as smart as we need it to be. IGMP knows nothing about the bandwidth of the flow being sent and has no knowledge of capacity or loading of any link. As such, links can get saturated using this method and can even mean that routine maintenance overloads the backup path resulting in an outage. Ryan concludes by saying that SDN resolves this problem. Ryan explains IGMP as analogous to knowing which address you need to drive to and simply setting off in the right direction, reacting to any traffic jams and roadblocks you find. In contrast, he says SDN is like having GPS where everything is taken in to account from the beginning and you know the whole path before you set off. Both will get you there, SDN will be more efficient, predictable and accountable.

To understand more about IP, watch these talks:
“Is IP really better than SDI?” by Ed Calverly detailing on how video over IP works and,
“Network design for live production” by, colleague of Ryan, Gerard Philips

Next in the line-up is François Gauthier who takes u through the history of cinema-related technologies showing how, at each stage, stanards helped the increasingly global industry work together. SMPTE’s earliest, well known, standardisation efforts were to aid the efforts around World War 1 interchanging films between projectors/cameras. Similarly, ARRI started in 1917 and has benefited from and worked to create SMPTE standards in cameras, lighting, workflows, colour grading and now mixed reality. François eloquently takes us on this journey showing at each stage the motivation for standardisation and how ARRI has developed in step.

A different type of innovation is on show in the next talk. Given by Cliff Lavalée updates on the latest improvements to his immersive studio. It was formerly featured in a previous SMPTE Toronto section talk when he explained the benefits of having a gaming-based 3D engine in this green-screen studio with camera tracking. In fact, it was the first studio of its kind as it came on line in 2016. Since then, game engined have made great inroads into studio production.

Having a completely virtual studio with camera tracking and 3D objects available to be live-rendered in response to the scene, has a number of benefits, Cliff explains. He can track the talent and make objects appear in front or behind them as appropriate in response to their movements. Real-time rendering and the green blank canvas gives design freedom as well as the ability to see what scenes will look like during the shoot rather than after. It’s no surprise that there are also cost savings. In one of a number of videos he shows, we see a children’s programme which takes place in a small village. By using the green screen, the live-action puppets can quickly change sets from place to place integrating real props with virtual backgrounds which move with the camera.

The last talk is from Cameron Reed who’s a former esports director and now works for Ross Video. Cameron gives a brief overview of how esports is split up into developers who make the game, tournament organisers, teams, live production companies and distribution platforms. The Broadcast Knowledge has followed esports for a while. Check out the back catalogue for more detailed videos on the subject.

It’s no surprise that the developers own the game. What’s interesting is that a computer game is much more complex and directly malluable than traditional sports games. Whilst FIFA might control football/soccer world-wide, there is little it can do to change the game. Formula 1 is, perhaps, closest to the esports model where rules will come and go about engines, tyres, refueling strategies etc. With esports, aspects of the game can change week to week in response to fans. Cameron explains esports as ‘free’ adverstising for the developers. Although they won’t always make money, even if they make 90% of their money back directly from the tournament and events for that year, it means they’ve had a 90% discount on their advertising budget. All the while, they’ve managed to inject life in to their game and extend the amount of interest it’s garnered. Camerong gives a brief acknowledgement that for distribution “Twitch is king” but underlines that this platform doesn’t support UHD as of the date of the meeting which doesn’t sit well with the efforts of the gameing industry to increase resolution and detail in games.

Cameron’s presentation finishes with a look at career progressions in esports both following a non/semi-technichal path and a technical path. The market holds a lot of interesting opportunities.

The session ends with a Q&A for all the panelists.