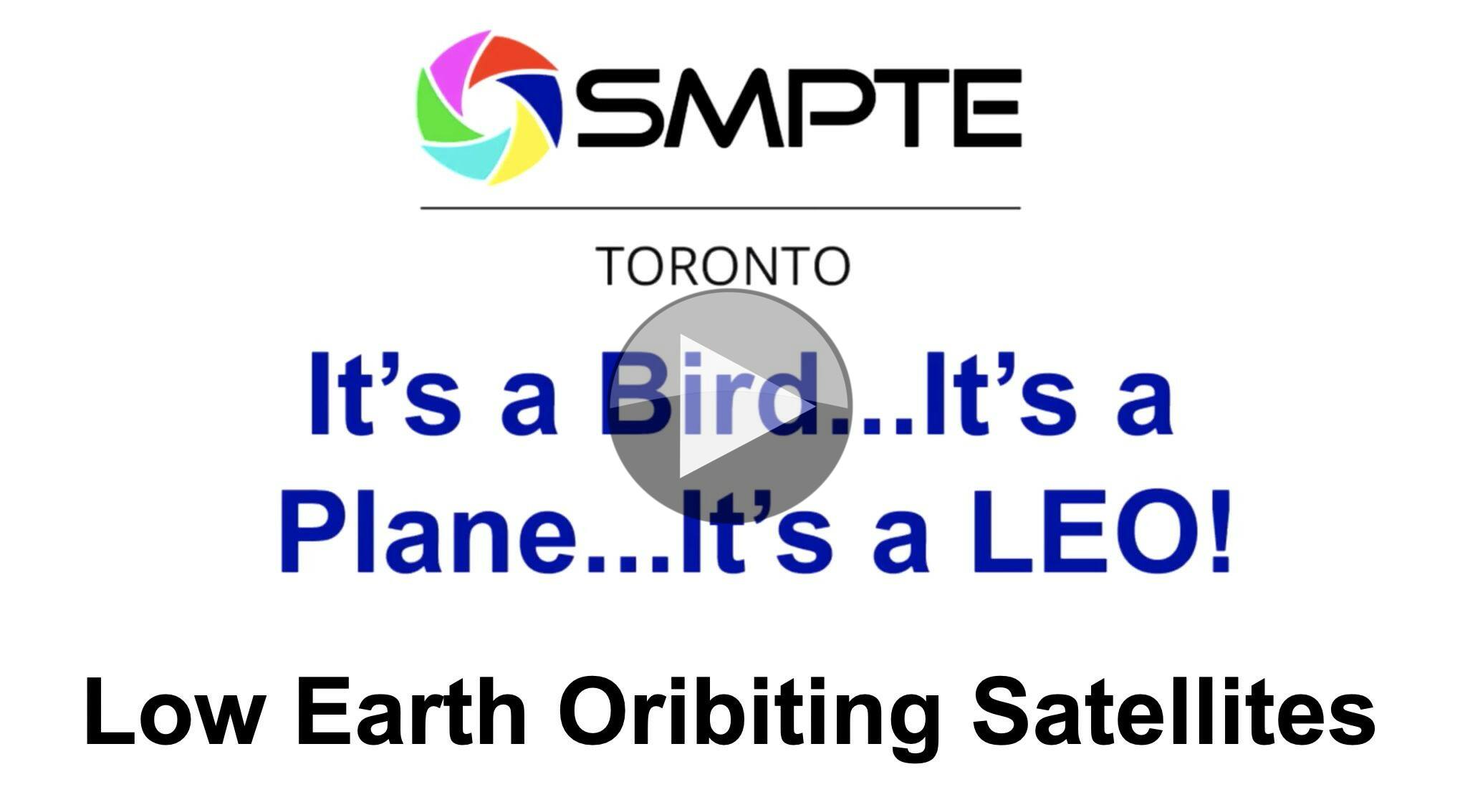 Low-latency internet connectivity from anywhere would be transformational for many use cases. Recently we’ve heard a lot about 5G because its low latency connectivity promise but the reach of each cell, particularly the high-bandwidth cells is severely range limited. Low Earth Orbiting satellites offer both low ping times but also global coverage. This explains why there seems to be a gold rush in the industry with so many companies working to launch fleets of thousands of satellites.

Starting this SMPTE Toronto Section video, Michael Martin from Metercor sets the scene and looks at SpaceX’s Starlink service. There are currently around 6000 satellites available at the moment, only 40% of which are fully functional. Many are impaired and, for instance, in elliptical orbits. As a reminder, Michael looks at Geostationary satellites, the best-known satellites in broadcast circles since they stay in the same position in the sky allowing for static dishes. Remembering that orbital speed is defined by your distance from the centre of Earth, geostationary satellites have a distance of approximately 36,000km which requires 120ms just for light to travel that distance meaning the best latency to such satellite is around 250ms which is not considered a great internet ping time. GPS satellites are closer in and orbit in only 12 hours. It’s the low-earth orbit, LEO, satellites that are close enough to provide low-latency network connectivity.

Starlink has satellites planned for orbits 550km and 1100km high which are only 1.8-4ms away for light. This means data can take approximately 10ms to get from you to its destination if going via satellites in the 1100km orbital shell. These shells are used to keep satellites away from each other to avoid collisions. On top of low-latency internet links, Starlink aims to deliver downlink speeds of 1Gbps when fully deployed and has already been seen to deliver over 300Mbps.

Other upcoming solutions are Kuiper, backed by Amazon, which is aiming for 3200 satellites delivering around 400Mbps of downlink speed. OneWeb which has already deployed many satellites and has secured funding to complete its satellite fleet. China has announced its intention to deliver 10,000 satellites to orbit and Samsung has intimated they intend a 2030 launch of a fleet of satellites. Whilst their intention is not fully clear, it may be linked with the plans for 6G which are already been worked on.

Michael finishes his section with a look at some use cases like using LEO satellites to provide a downlink into a 5G system for a remote village or small town. This would free locations from requiring fibre both for delivery of the internet to the ISP, but also for delivery around the town which would be 5G based. First responders are another example of people who would benefit from always-on, any-location connectivity. Michaels last point is that although we can be very interested in how LEOs deliver the service we want, most people still only care about accessing the content they are interested; a good internet connection should be transparent to them.

The second presentation in the video is from Telesat whose Telesat Lightspeed constellation of LEO satellites whose satellites are planned for launch next year with trials starting in 2023 and full-service available Q4 2024. The fleet will feature inter-satellite communication via laser links and will initially focus on serving Canada before becoming global. Its aim is to become ‘virtual fibre’ tying in with Michael’s point about connectivity being invisible to users.

Ted Baker and Thomas Detlor take us through the envisaged use cases such as backhaul, government, backup/disaster recovery and connectivity to ships and oil platforms. They highlight the broadcast use cases of linking stadia, buildings and creating backup links with their layer 2 service on which you can build your layer 3 network.

They finish by looking at a checklist comparing all of the present and upcoming services, installation methods, upcoming equipment for up/downlinks and some comments on how Telesat is different to Starlink. The session finishes with a Q&A covering many items including the concern of in-orbit crashes and rain fade.