Playout has been gradually moving to the cloud for a number of years now. Famously Discovery moved all of their thematic playout to the cloud in 2018 and many have done the same since. As we saw the other day, Sky Italia are now seeing ‘code as infrastructure’ whereby automated API calls launch the in-cloud infrastructure they need as part of their linear playout.

In this video, we hear from Matt Westrup from A+E EMEA on how they’ve moved their playout to the cloud with their partner Amagi. Running 30 channels in Europe, Matt explains that due to some business uncertainty with a partner company, the need for a DR facility was identified. Talking to Srinivasan KA from Amagi, they were able to create this using Amagi’s product portfolio based in AWS. Matt explains that after the DR facility was set up, they moved quickly to full mirroring and ultimately they flipped the switch and they announced they were now broadcasting from the cloud. Srinivasan KA explains that many companies take a similar route when working in the cloud. Sometimes a cost-effective DR facility is all they need, however it’s easy to replicate all your workflows in the cloud and have that on standby. This can be done by keeping the content in the cloud evergreen, running automation but keeping the playout functions switched off to save money which can be quickly brought online as needed. Srinivasan KA looks at the high-level diagram of the A+E operation showing how S3 holds the content, goes through a workflow to the CPU-powered playout and then is handed off using direct connect to affiliates and telcos using Amagi’s POPs.

Matt comments that this was relatively easy to do from a business perspective “No-one was investing massively in fixed infrastructure” and they’ve found they have been faster to market with a speed they’ve “never experienced before.” Needless to say, the move to the cloud also came into its own and provided a seamless move work home working during the pandemic. And, looking more longterm, A+E will continue to benefit from not having to manage the physical datacentre/serber room infrastructure.

The video finishe swith an overview of Broadcast in AWS from Andy Kane. He covers the main drivers for broadcasters moving to the cloud such as business agility, a preference with some companies for increasing Opex spending, increased ease in experiementing with new technologies/ways of engaging with customers, using a remote workforce among others. Andy covers an example broadcast flow using MediaConnect for contribution, MediaLive Statmux for distibution, redundancy strategies and other building blocks such as TAG multiviewers. 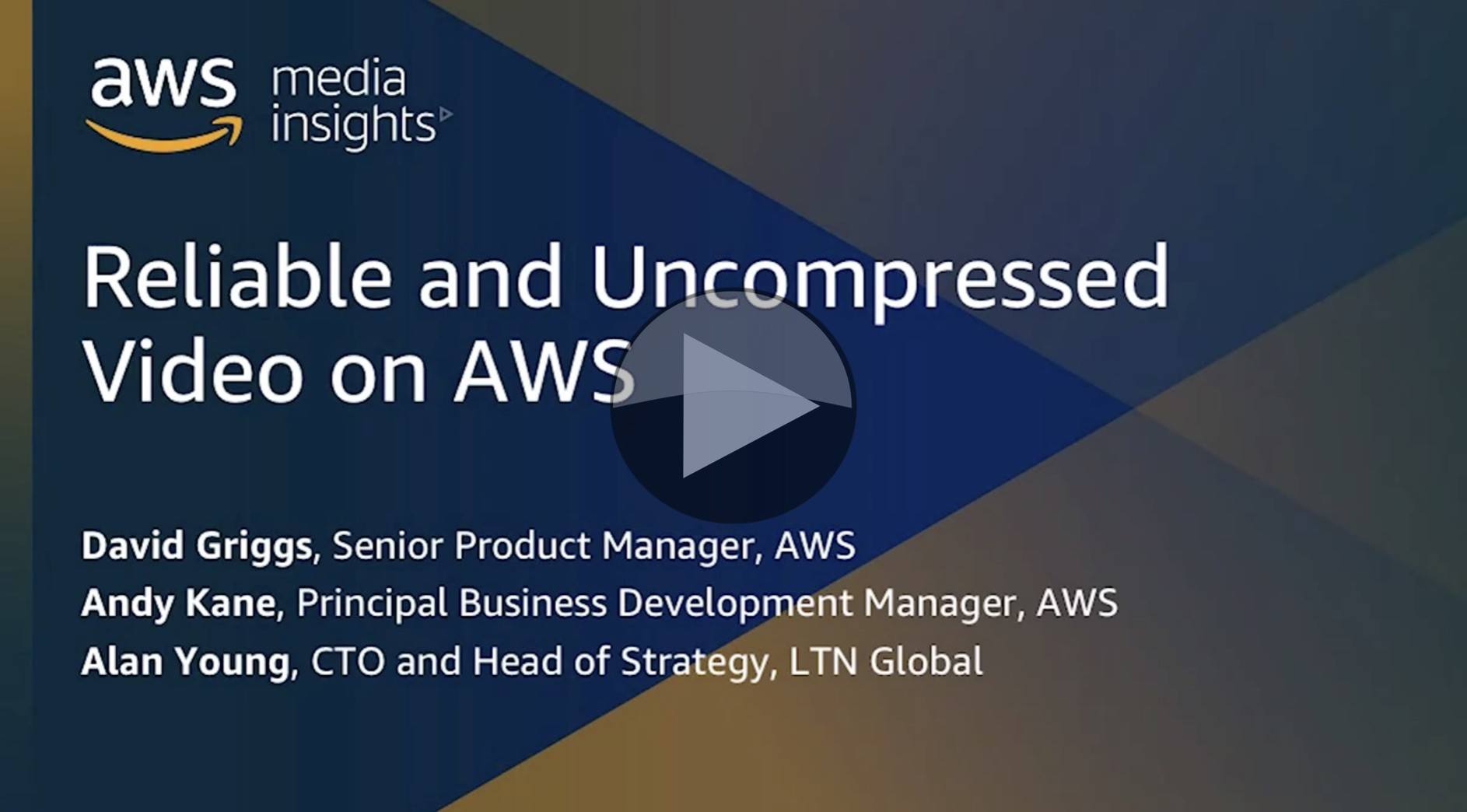 Uncompressed video in the cloud is an answer to the dreams that many people are yet to have, but the early adopters of cloud workflows, those that are really embedding the cloud into their production and playout efforts are already asking for it. AWS have developed a way of delivering this between computers within their infrastructure and have invited a vendor to explain how they are able to get this high-bandwidth content in and out.

On The Broadcast Knowledge we don’t normally feature such vendor-specific talks, but AWS is usually the sole exception to the rule as what’s done in AWS is typically highly informative to many other cloud providers. In this case, AWS is first to the market with an in-prem, high-bitrate video transfer technology which is in itself highly interesting. Once in the cloud, AWS Cloud Digital Interface (CDI) is what allows video to travel reliably from one computer to another. Andy Kane explains what the drivers were to create this product. With the mantra that ‘gigabits are the new megabits’, they looked at how they could move high-bandwidth signals around AWS reliably with the aim of abstracting the difficulty of infrastructure away from the workflow. The driver for uncompressed in the cloud is reducing re-encoding stages since each of them hits latency hard and, for professional workflows, we’re trying to keep latency as close to zero as possible. By creating a default interface, the hope is that inter-vendor working through a CDI interface will help interoperability. LTN estimate their network latency to be around 200ms which is already a fifth of a second, so much more latency on top of that is going to creep up to a second quite easily.

David Griggs explains some of the technical detail of CDI. For instance, it has the ability to send data of any format be that raw packetised video, audio, ancillary data or compressed data using UDP, multicast between EC2 instances within a placement group. With a target latency of less than one frame, it’s been tested up to UHD 60fps and is based on the Elastic Fabric Adapter which is a free option for EC2 instances and uses kernel bypass techniques to speed up and better control network transfers. CPU use scales linearly so where 1080p60 takes 20% of a CPU, UHD would take 80%. Each stream is expected to have its own CPU.

The video ends with Alan looking at the future where all broadcast functionality can be done in the cloud. For him, it’s an all-virtual future powered by the increasingly accessible high-bandwidth internet connectivity coming in a less than the cost of bespoke, direct links. David Griggs adds that this is changing the financing model moving from a continuing effort to maximise utilisation of purchased assets, to a pay as you go model using just the tools you need for each production.

Watch now!
Download the slides
Please note, if you follow the direct link the video featured in this article is the seventh on the linked page.