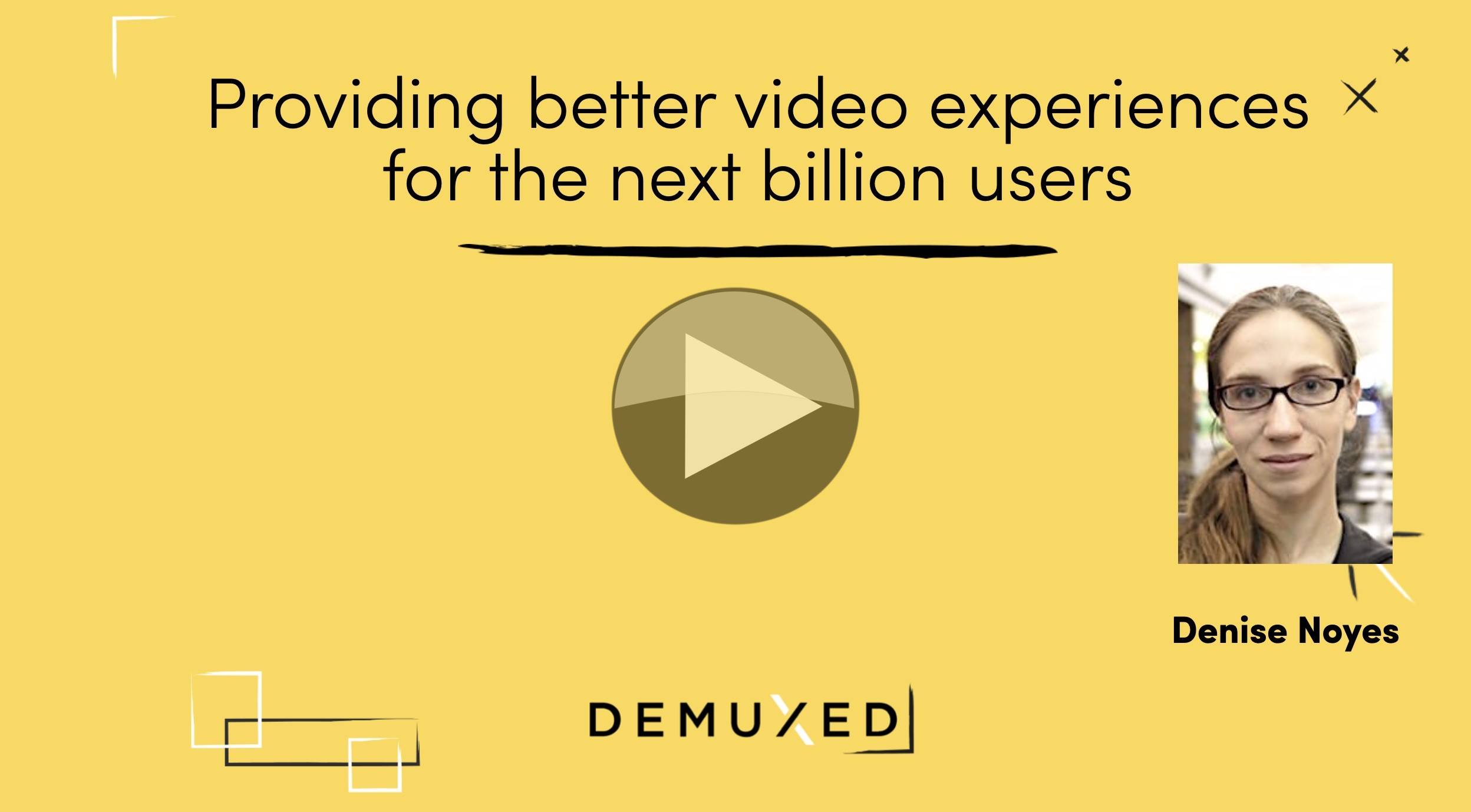 What’s the best way for a billion people all on mobile networks to have a universally great streaming experience? It’s not trivial, and no service is perfect, but Facebook set out to find out what problems existed and find ways to fix them. This video explains their approach and solutions.

Denise Noyes from Facebook spoke at Demuxed 2020 about their work in India over the year. For Facebook, India is unique for this research as it represents such a large number of people almost universally using Android phones and mobile data. Not only does this allow them to understand the low-bitrate performance of video, but the Android penetration level simplifies comparisons.

The problems that Denise and her colleagues identified were gaps in the bitrate ladders where the ABR ladder either wasn’t well optimised or didn’t go low enough. There were also some ABR logic/decisions that were seen to be causing problems along with server delays from the CDN and internal congestion within the app. The research looked at ‘average bad sessions per user’ rather than the overall number of bad sessions which would be skewed by how many videos people generally watched.

Covid had a bearing on the research as this was being conducted by in-person interviews within India. These teams had to come home but the relevance of the research was acutely highlighted by the networks in other countries which worsened in response to the rising amount of traffic making them closer to the Indian example.

Denise’s team worked with colleagues throughout the company to create improvements across the whole network and delivery stack. On the encoding front, they decreased the lowest encoding level to 100kbps. This doesn’t look amazing, as seen by the metric score, but it’s better than buffering and can be watchable dependent on content. The GOP size was also increased from 2 seconds to 5. Longer GOP sizes are known to deliver improved bitrate, in this case up to 8%, but there is a tradeoff to pay in latency and how frequently you can move up/down the ABR ladder. Facebook found that the tradeoffs were worth the improvement for the viewers.

That FB-MOS score comes in handy for avoiding the lowest rungs of the ABR ladder. As their MOS score is quite low, the player will only choose it if it really has no choice otherwise, it will prefer to settle on a higher quality version if it isn’t able to go up the ladder. Ironically, they have also implemented logic to limit who gets the highest bandwidth streams since most users would prefer to spend less on data than get that disproportionately low improvement in quality.

In playback, Denise explains that they have reduced the impact of occasional anomalies on the bandwidth estimation and adjusted prefetching to prefetch the first chunk of all videos it would like to prefetch before getting the next chunk. This has reduced the chance that someone is able to choose a video which hasn’t yet been buffered and hence have to wait for it to start.

Lastly Denise covers the work done at the network layer seeing a move from HTTP/2 to QUIC. We see how the removal of head-of-line blocking has helped and that, not only has this the move to QUIC seen an overall improvement in performance but as congestion increased, QUIC traffic has shown a disproportionate improvement.

Denise concludes highlighting that this work across the network stack with wide collaboration has not only delivered the desired results but is a vital approach for any company looking to make marked improvements in customer experience.