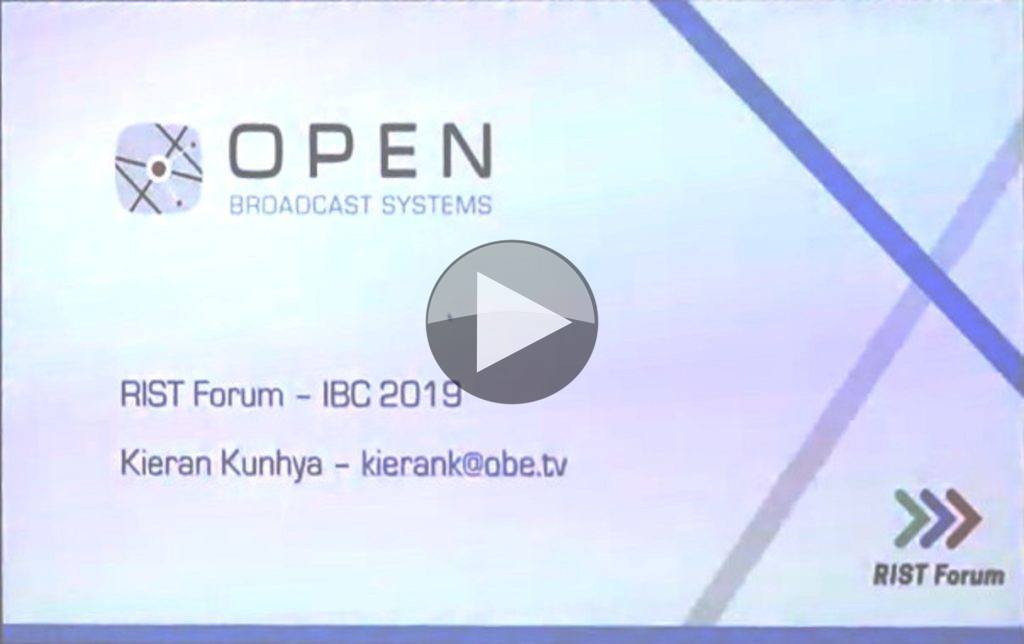 RIST is a streaming protocol which allows lossy networks such as the internet to be used for critical streaming applications. Called Reliable Internet Stream Transport, it uses ARQ (Automatic Repeat reQuest) retransmission technology to request any data that is lost by the network, creating reliable paths for video contribution.

In this presentation, Kieran Kunhya from Open Broadcast Systems explains why his company has chosen RIST protocol for their software-based encoders and decoders. Their initial solution for news, sports and linear channels contribution over public internet were based on FEC (Forward Error Correction), a technique used for controlling errors in transmission by sending data in a redundant way using error-correcting code. However, FEC couldn’t cope with large burst losses, there was limited interoperability and the implementation was complex. Protecting the stream by sending the same feed over multiple paths and/or sending a delayed version of the stream on the same path, had a heavy bandwidth penalty. This prompted them, instead, to implement an ARQ technique based on RFC 4585 (Extended RTP Profile for Real-time Transport Control Protocol-Based Feedback), which gave them functionality quite similar to the basic RIST functionality.

Key to the discussion, Kieran explains why they decided not to adopt the SRT protocol. As SRT is based file transfer protocol, it’s difficult or impossible to add features like bonding, multi-network and multi-point support which were available in RIST from day one. Moreover, RIST has a large IETF heritage from other industries and is vendor-independent. In Kieran’s opinion, SRT will become a prosumer solution (similar to RTMP, now, for streaming) and RIST will be the professional solution (analogous to MPEG-2 Transport Streams).

Different applications for the RIST protocol are discussed, including 24/7 linear channels for satellite uplink from playout, interactive (two-way) talking heads for news, high bitrate live events and reverse vision lines for monitoring purposes. Also, there is a big potential for using RIST in cloud solutions for live broadcast production workflows. Kieran hopes that more broadcasters will start using spin-up and spin-down cloud workflows, which will help save space and money on infrastructure.

What’s interesting, Open Broadcast Solutions are not currently interested in RIST Main Profile (the main advantages of this profile are support for encryption, authentication and in-band data). Kieran explains that to control devices in remote locations you need some kind of off-the-shelf VPN anyway. These systems provide encryption and NAT port traversal, so the problem is solved at a different layer in the OSI model and this gives customers more control over the type of encryption they want.