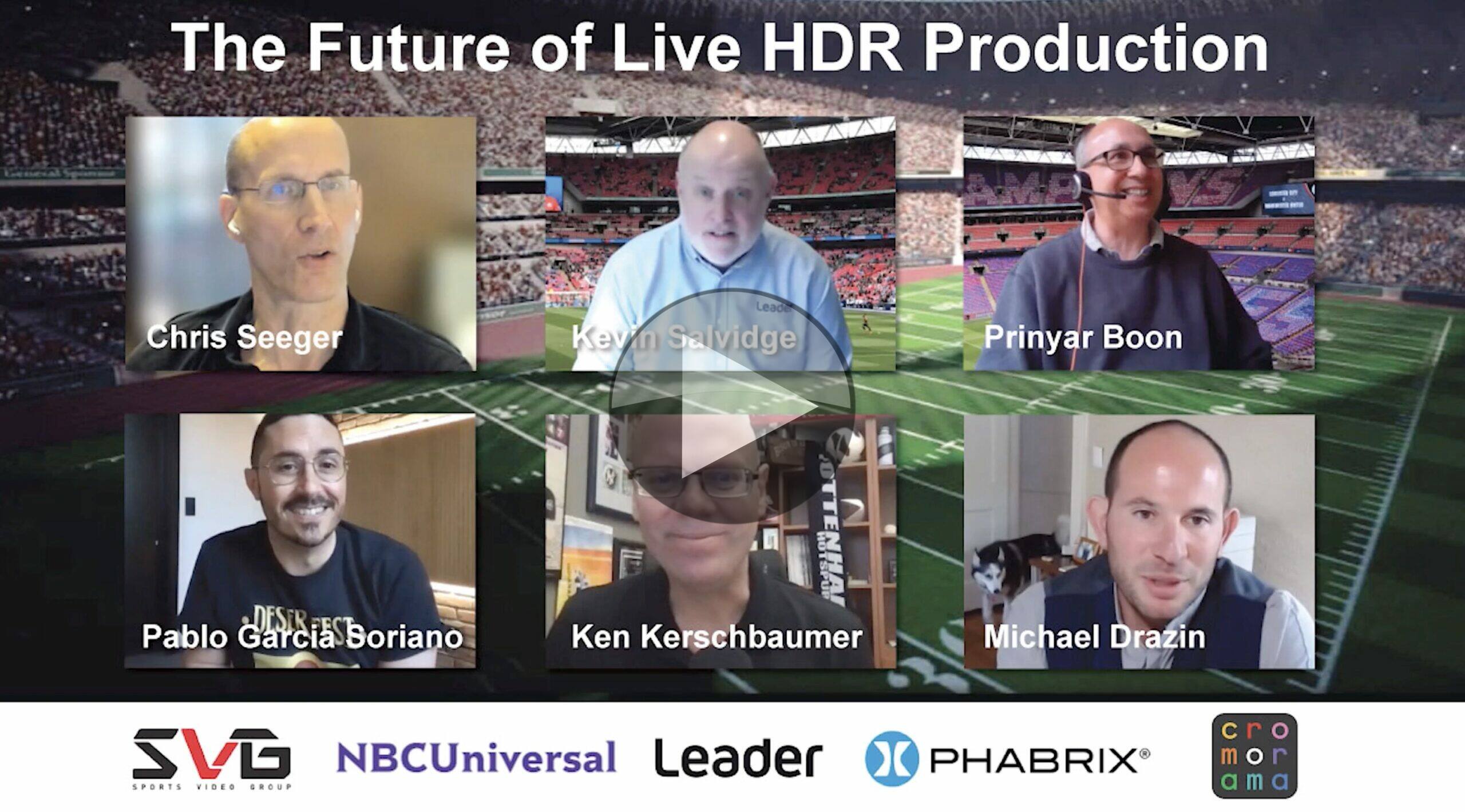 HDR has long been hailed as the best way to improve the image delivered to viewers because it packs a punch whatever the resolution. Usually combined with a wider colour gamut, it brings brighter highlights, more colours with the ability to be more saturated. Whilst the technology has been in TVs for a long time now, it’s continued to evolve and it turns out doing a full, top tier production in HDR isn’t trivial so broadcasters have been working for a number of years now to understand the best way to deliver HDR material for live sports.

Leader has brought together a panel of people who have all cut their teeth implementing HDR in their own productions and ‘writing the book’ on HDR production. The conversation starts with the feeling that HDR’s ‘there’ now and is now much more routinely than before doing massive shows as well as consistent weekly matches in HDR.

Pablo Garcia Soriano from CORMORAMA introduces us to light theory talking about our eyes’ non-linear perception of brightness. This leads to a discussion of what ‘Scene referred’ vs ‘Display referred’ HDR means which is a way of saying whether you interpret the video as describing the brightness your display should be generating or the brightness of the light going into the camera. For more on colour theory, check out this detailed video from CVP or this one from SMPTE.

Pablo finishes by explaining that when you have four different deliverables including SDR, Slog-3, HLG and PQ, the only way to make this work, in his opinion, is by using scene-referred video.

Next to present is Prin Boon from PHABRIX who relates his experiences in 2019 working on live football and rugby. These shows had 2160p50 HDR and 1080i25 SDR deliverables for the main BT Programme and the world feed. Plus there were feeds for 3rd parties like the jumbotron, VAR, BT Sport’s studio and the EPL.

2019, Prin explains, was a good year for HDR as TVs and tablets were properly available in the market and behind the scenes, Stedicam now had compatible HDR rigs and radio links could now be 10-bit. Replay servers, as well, ran in 10bit. In order to produce an HDR programme, it’s important to look at all the elements and if only your main stadium cameras are HDR, you soon find that much of the programme is actually SDR originated. It’s vital to get HDR into each camera and replay machine.

Prin found that ‘closed-loop SDR shading’ was the only workable way of working that allowed them to produce a top-quality SDR product which, as Kevin Salvidge reminds us is the one that earns the most money still. Prin explains what this looks like, but in summary, all monitoring is done in SDR even though it’s based on the HDR video.

In terms of tips and tricks, Prin warns about being careful with nomenclature not only in your own operation but also in vendor specified products giving the example of ‘gain’ which can be applied either as a percentage or as dB in either the light or code space, all permutations giving different results. Additionally, he cautions that multiple trips to and from HDR/SDR will lead to quantisation artefacts and should be avoided when not necessary.

The last presentation is from Chris Seeger and Michael Drazin from NBC Universal talk about the upcoming Tokyo Olympics where they’re taking the view that SDR should look the ‘same’ as HDR. To this end, they’ve done a lot of work creating some LUTs (Look Up Tables) which allow conversion between formats. Created in collaboration with the BBC and other organisations, these LUTs are now being made available to the industry at large.

They use HLG as their interchange format with camera inputs being scene referenced but delivery to the home is display-referenced PQ. They explain that this actually allows them to maintain more than 1000 NITs of HDR detail. Their shaders work with HDR, unlike the UK-based work discussed earlier. NBC found that the HDR and SDR out of the CCU didn’t match so the HDR is converted using the NBC LUTs to SDR. They caution to watch out for the different primaries of BT 709 and BT 2020. Some software doesn’t change the primaries and therefore the colours are shifted.

NBC Universal put a lot of time into creating their own objective visualisation and measurement system to be able to fully analyse the colours of the video as part of their goal to preserve colour intent even going as far as to create their own test card.

The video ends with an extensive Q&A session.