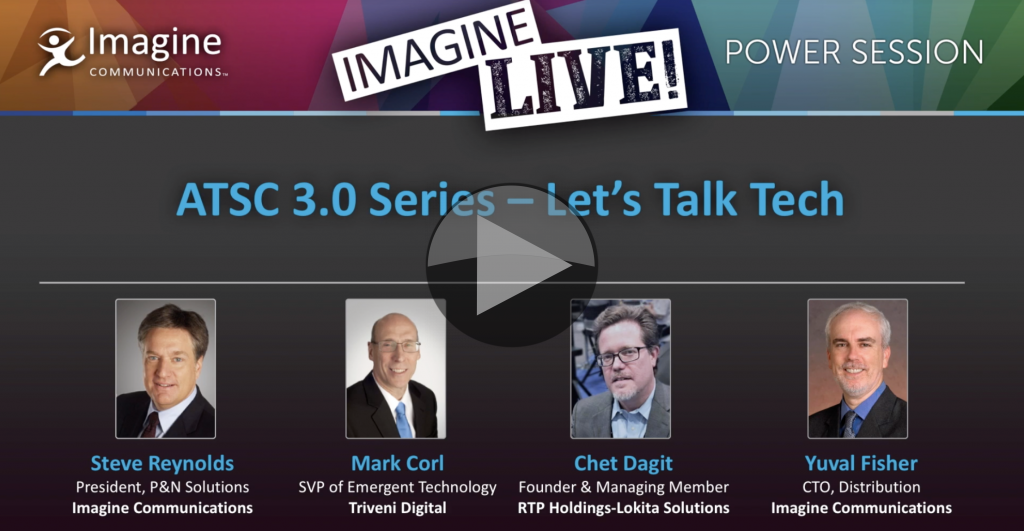 ATSC 3.0 is the major next step in broadcasting for the US, South Korea and other countries and is a major update to the ATSC standard in so many way that getting across it all is not trivial. All terrestrial broadcasting in the US are done with ATSC as opposed to many other places, including Europe, which use DVB.

ATSC 3.0 brings in OFDM modulation which is a tried and tested technology also used in DVB. But the biggest change in the standard is that all of the transport within ATSC is IP. Broadcasters now, using broadband as a return path, have two-way communication with their viewers allowing transfer of data as well as media.

In this talk from Imagine Communications, we talk a look into the standard which, as is common nowadays, is a suite of standards. These standards cover Early Alerts, immersive audio, DRM, return paths and more. We then have a look at the system architecture of the ATSC 3.0 broadcast deployed in Phoenix.

South Korea has been pushing forward ATSC 3.0 and Chet Dagit looks at what they have been doing and how they’ve created high quality UHD channels to the consumer. He then looks at what the US can learn from this work but also DVB deployments in Europe.

Finally, Yuval Fisher looks at how the data and granularity available in ATSC 3.0 allows for more targeted ads and how you would manage both internally and harnessing it for ad campaigns.