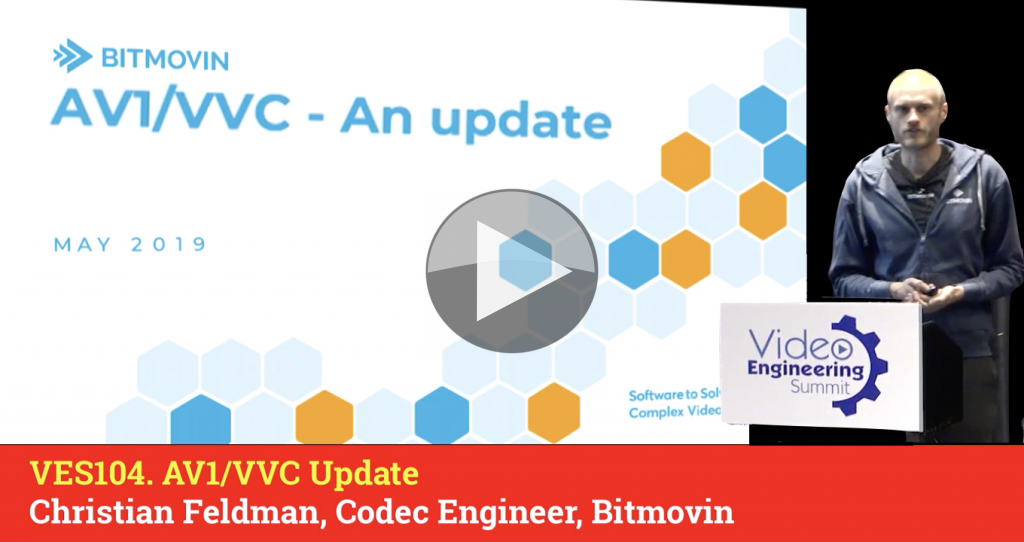 AV1 and VVC are both new codecs on the scene. Codecs touch our lives every day both at work and at home. They are the only way that anyone receives audio and video online and television. So all together they’re pretty important and finding better ones generates a lot of opinion.

So what are AV1 and VVC? VVC is one of the newest codecs on the block and is undergoing standardisation in MPEG. VVC builds on the technologies standardised by HEVC but adds many new coding tools. The standard is likely to enter draft phase before the end of 2019 resulting in it being officially standardised around a year later. For more info on VVC, check out Bitmovin’s VVC intro from Demuxed

AV1 is a new but increasingly known codec, famous for being royalty free and backed by Netflix, Apple and many other big hyper scale players. There have been reports that though there is no royalty levied on it, patent holders have still approached big manufacturers to discuss financial reimbursement so its ‘free’ status is a matter of debate. Whilst there is a patent defence programme, it is not known if it’s sufficient to insulate larger players. Much further on than VVC, AV1 has already had a code freeze and companies such as Bitmovin have been working hard to reduce the encode times – widely known to be very long – and create live services.

Here, Christian Feldmann from Bitmovin gives us the latest status on AV1 and VVC. Christian discusses AV1’s tools before discussing VVC’s tools pointing out the similarities that exist. Whilst AV1 is being supported in well known browsers, VVC is at the beginning.

There’s a look at the licensing status of each codec before a look at EVC – which stands for Essential Video Coding. This has a royalty free baseline profile so is of interest to many. Christian shares results from a Technicolor experiment.