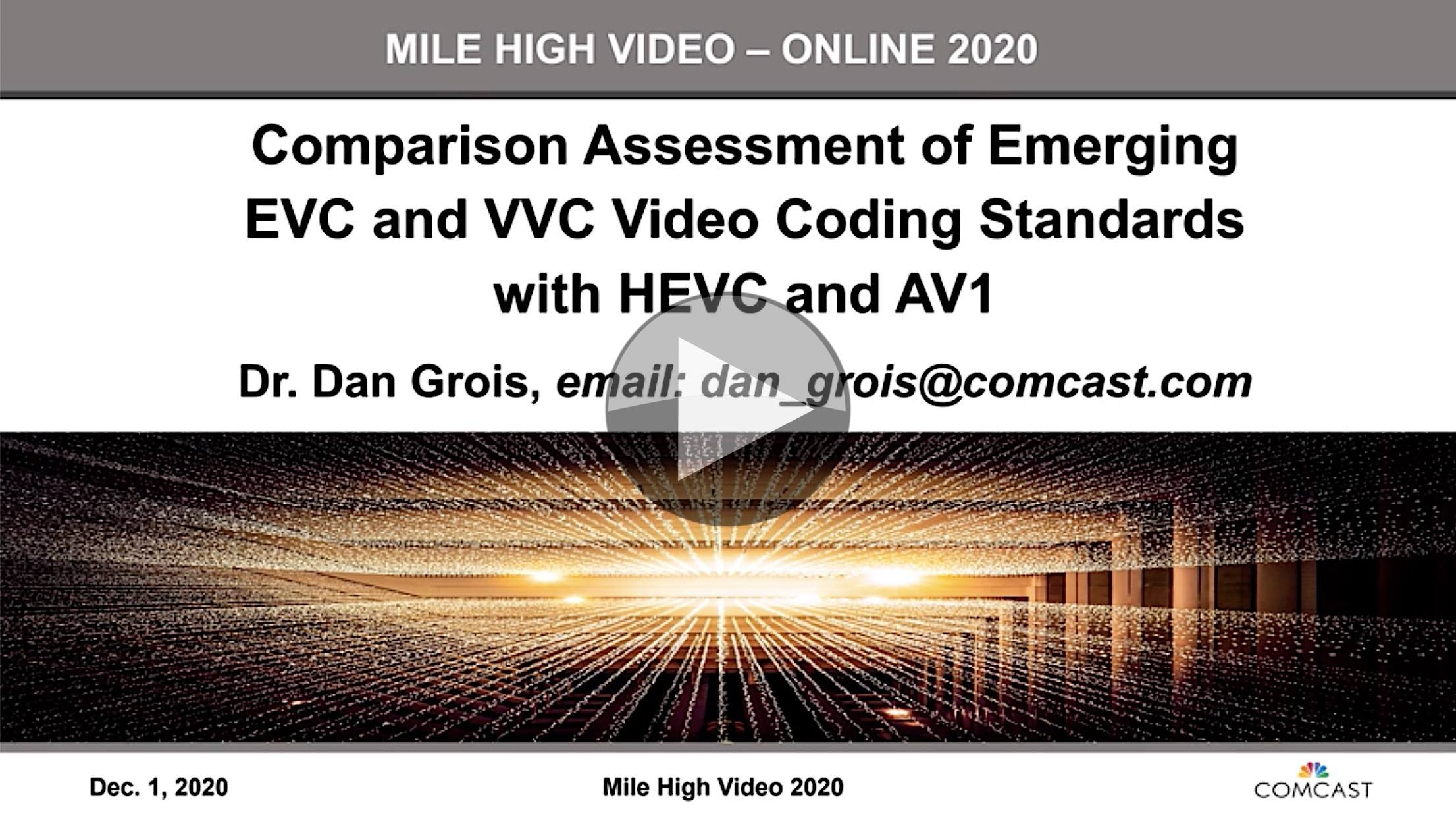 Dan Grois from Comcast has been looking at the new codecs VVC and EVC against AV1 and HEVC. VVC and EVC were both released last year and join LCEVC as the three most recent video codecs from MPEG (VVC was a collaboration between MPEG and IRU). In the same way, HEVC is known as H.265, VVC can be called H.266 and it draws its heritage from the HEVC too. EVC, on the other hand, is a new beast whose roots are absolutely shared with much of MPEG’s previous DCT-based codecs, but uniquely it has a mode that is totally royalty-free. Moreover, its high-performant mode which does include patented technology can be configured to exclude any individual patents that you don’t wish to use thus adding some confidence that businesses remain in control of their liabilities.

AV1 needs special treatment in this comparison. Dan explains that AV1 doesn’t have the same approach to GOPs as MEPG so it’s well known that fixing it’s QP will make it inefficient, however, this is what’s necessary for a fair comparison so, in addition to this, it’s also run in VBR mode which allows it to use its GOP structure to the full such as AV1’s invisible frames which carry data which can be referenced by other frames but which are never actually displayed. 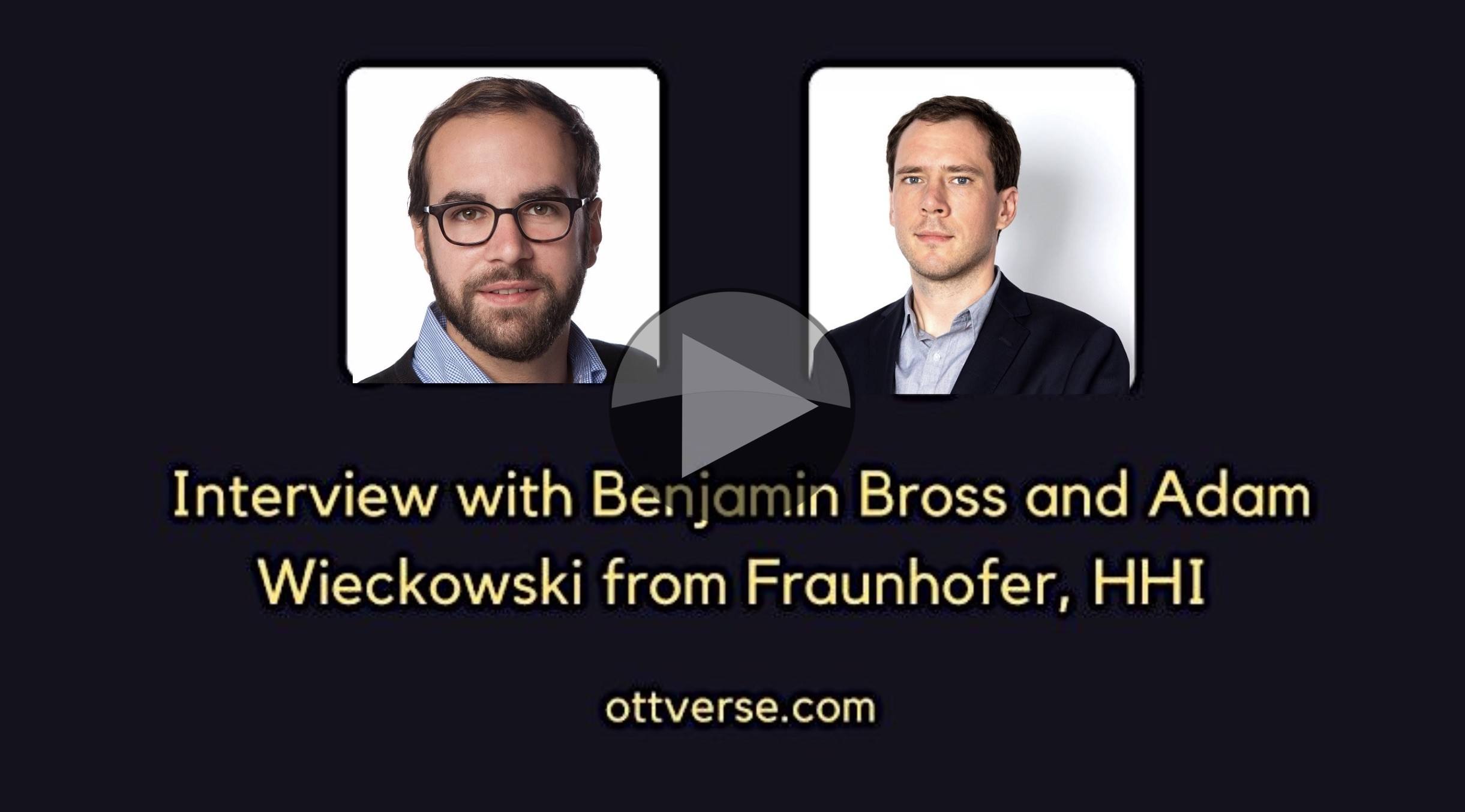 VVC was finalised in mid-2020 after five years of work. AVC’s still going strong and is on its 26th version, so it’s clear there’s still plenty of work ahead for those involved in VVC. Heavily involved in AVC, HEVC and now VVC is the Fraunhofer Heinrich Hertz Institute (HHI) who are patent holders in all three and for VVC they are, for the first time, developing a free, open-source encoder and decoder for the standard.

In this video from OTTVerse.com, Editor Krishna Rao speaks to Benjamin Bross and Adam Więckowsk both from Fraunhofer HHI. Benjamin has previously been featured on The Broadcast Knowledge talking at Mile High Video about VVC which would be a great video to check out if you’re not familiar with this new codec given before its release.

They start by discussing how the institute is supported by the German government, money received from its patents and similar work as well as the companies who they carry out research for. One benefit of government involvement is that all the papers they produce are made free to access. Their funding model allows them the ability to research problems very deeply which has a number of benefits. Benjamin points out that their research into CABAC which is a very efficient, but complex entropy encoding technique. In fact, at the time they supported introducing it into AVC, which remember is 19 years old, it was very hard to find equipment that would use it and certainly no computers would. Fast forward to today and phones, computers and pretty much all encoders are able to take advantage of this technique to keep bitrates down so that ability to look ahead is beneficial now. Secondly, giving an example in VVC, Benjamin explains they looked at using machine learning to help optimise one of the tools. This was shown to be too difficult to implement but could be replaced by matrix multiplication which and was implemented this way. This matrix multiplication, he emphasises, wouldn’t have been able to be developed without having gone into the depths of this complex machine learning.

Krishna suggests there must be a lot of ‘push back’ from chip manufacturers, which Benjamin acknowledges though, he says people are just doing their jobs. It’s vitally important, he continues, for chip manufacturers to keep chip costs down or nothing would actually end up in real products. Whilst he says discussions can get quite heated, the point of the international standardisation process is to get the input at the beginning from all the industries so that the outcome is an efficient, implementable standard. Only by achieving that does everyone benefit for years to come.e

The conversation then moves on to the open source initiative developing VVenC and VVdeC. These are separate from the reference implementation VTM although the reference software has been used as the base for development. Adam and Benjamin explain that the idea of creating these free implementations is to create a standard software which any company can take to use in their own product. Reference implementations are not optimised for speed, unlike VVenC and VVdeC. Fraunhofer is expecting people to take this software and adapt it for, say 360-degree video, to suit their product. This is similar to x264 and x265 which are open source implementations of AVC and HEVC. Public participation is welcomed and has already been seen within the Github project.

Adam talks through a slide showing how newer versions of VVenC have increased speed and bitrate with more versions on their way. They talk about how some VVC features can’t really be seen from normal RD plots giving the example of open vs closed GOP encoding. Open GOP encoding can’t be used for ABR streaming, but with VVC that’s now a possibility and whilst it’s early days for anyone having put the new type of keyframes through their paces which enable this function, they expect to start seeing good results.

The conversation then moves on to encoding complexity and the potential to use video pre-processing to help the encoder. Benjamin points out that whilst there is an encode increase to get to the latest low bitrates, to get to the best HEVC can achieve, the encoding is actually quicker. Looking to the future, he says that some encoding tools scale linearly and some exponentially. He hopes to use machine learning to understand the video and help narrow down the ‘search space’ for certain tools as it’s the search space that is growing exponentially. If you can narrow that search significantly, using these techniques becomes practical. Lastly, they say the hope is to get VVenC and VVdeC into FFmpeg at which point a whole suite of powerful pre- and post- filters become available to everyone. 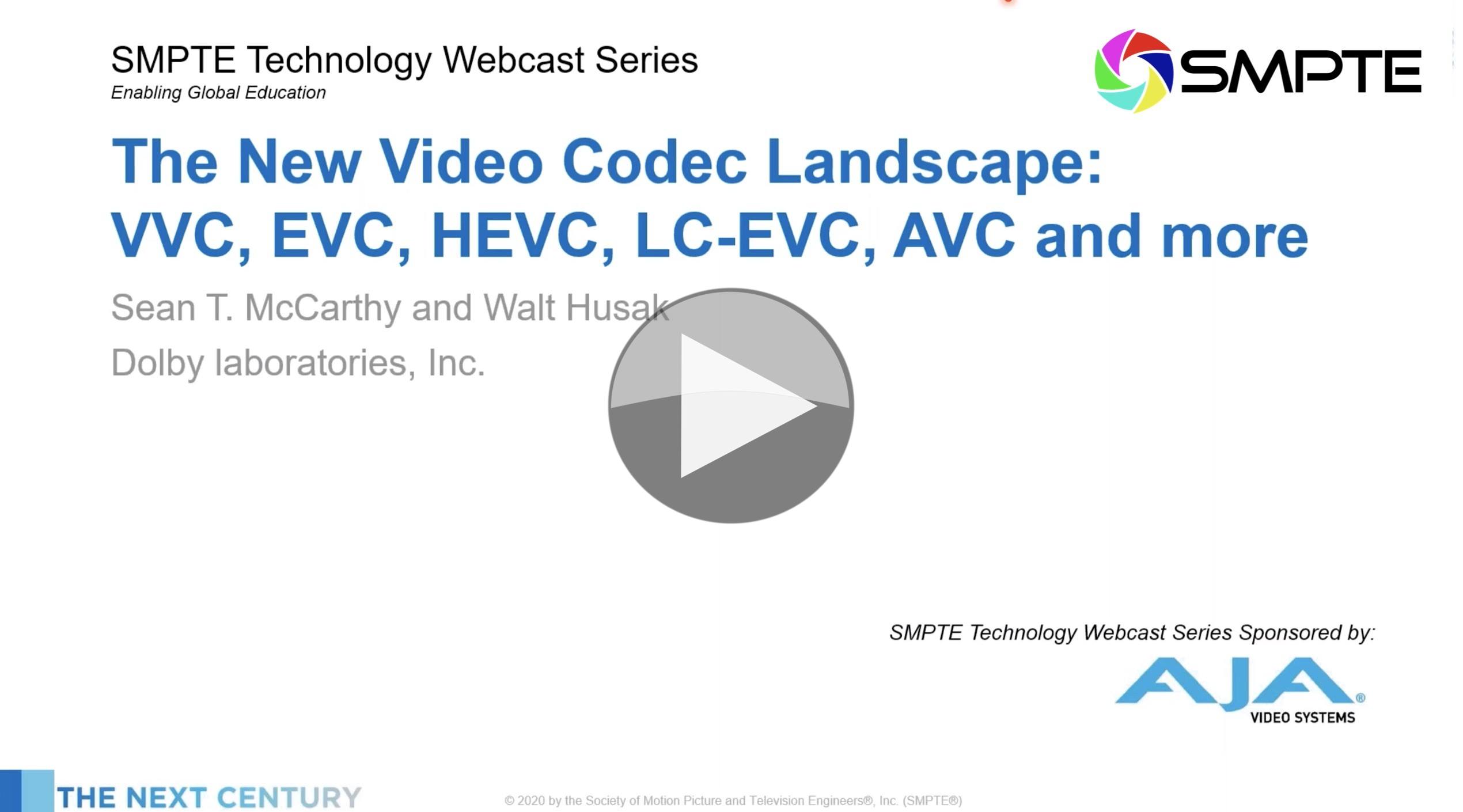 In the penultimate look back at the top articles of 2020, we recognise the continued focus on new codecs. Let’s not shy away from saying 2020 was generous giving us VVC, LCEVC and EVC from MPEG. AV1 was actually delivered in 2018 with an update (Errata 1) in 2019. However, the industry has avidly tracked the improved speeds of the encoder and decoder implementations.
Lastly, no codec discussion has much relevance without comparing to AV1, HEVC and VP9.

So with all these codecs spinning around it’s no surprise that one of the top views of 2020 was a video entitled “VVC, EVC, LCEVC, WTF? – An update on the next hot codecs from MPEG”. This video was from 2019 and since these have all been published now, this extensive roundup from SMPTE is a much better resource to understand these codecs in detail and in context with their predecessors.

Click here to read the article and watch the video.

The article explains many of the features of the new codecs: both how they work and also why there are three. Afterall, if VVC is so good, why release EVC? We learn that they optimise for different features such as computation, bitrate and patent licensing among other aspects.