IPMX is bringing a standards-based, software deployable connectivity solution to ProAV. It stands itself in contrast to hardware-based IP technologies such as Zeevee and SDVoE which both aim to create de facto standards by building large alliances of companies based on their chips. IPMX’s aim is to open up the market to a free-to-access technology that can be implemented in hardware and software alike. In this way vendors have more freedom in implementation with the hope of wider interoperability, depending on IPMX adoption. These are amongst some of the business reasons behind IPMX which are covered in this talk Matrox’s David Chiappini.

In today’s video, Matrox’s Jean Lapierre looks at the technical side of IPMX to answer some of the questions from those who have been following its progress. AIMS, the Alliance for IP Media Solutions, are upfront about the fact that IPMX is a work in progress with important parts of the project dealing with carriage of HDCP and USB still being worked on. However, much has already been agreed so it makes sense to start thinking about how this would work in real life when deployed. For a primer on the technical details of IPMX, check out this video from Andreas Hildebrand.

Jean starts by outlining the aims of the talk; to answer questions such as whether IPMX requires a new network, expensive switches and PTP. IPMX, he continues, is a collection of standards and specifications which enable transport of HD, 4K or 8K video in either an uncompressed form or lightly compressed, visually lossless form with a latency of <1ms. Because you can choose to enable compression, IPMX is compatible with 1GB, CAT5e networks as well as multi-gigabit infrastructure. Moreover, there’s nothing to stop mixing compressed and uncompressed signals on the same network. In fact, the technology is apt for carrying many streams as all media (also known as ‘essences’ to include metadata) is sent separately which can lead to hundreds of separate streams on the network. The benefit of splitting everything up is that in the past if you wanted to read subtitles, you would have to decode a 3Gbps signal to access a data stream better measured in bytes per second. Receiving just the data you need allows servers or hardware chips to minimise costs.

Jean explains how multicast is used to deliver streams to multiple receivers and how receivers can subscribe to multiple streams. A lot of the time, video streams are used separately such as from a computer to a projector meaning exact timing isn’t needed. Even coming into a vision mixer/board doesn’t always need to be synchronised because for many situations, having a frame synchroniser on all inputs works well. There are, however, times when frame-accurate sync is important and for those times, PTP can be used. PTP stands for the Precise Time Protocol and if you’re unfamiliar, you can find out more here.

The upshot of using PTP with IPMX is that you can unlock perfect synchronisation for applications like video walls; any time you need to mix signals really. IMPX relaxes some of the rules of PTP that SMPTE’s ST 2059 employs to reduce the load on the grandmaster clocks. PTP is a very accurate timing mechanism but it’s fundamentally different from black and burst because it’s a two-way technology that relies on an ongoing dialogue between the devices and the clock. This is why Jean says that for anything more than a small network, you are likely to need a switch that is PTP aware and can answer the queries which would normally go to the single, central switch. In summary then, Jean explains that for many IPMX implementations you don’t need a new network, a PTP grandmaster or PTP aware switches. But for those wanting to mix signals with perfect sync or those who have a large network, new investment would reap benefits. 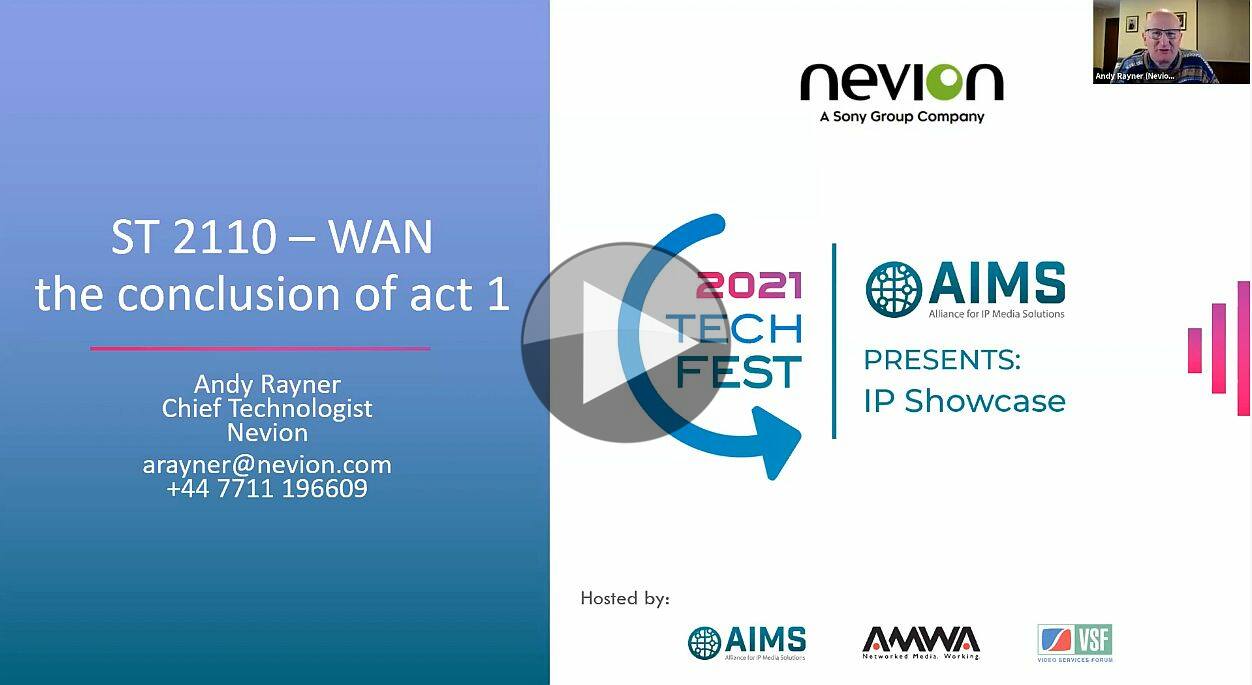 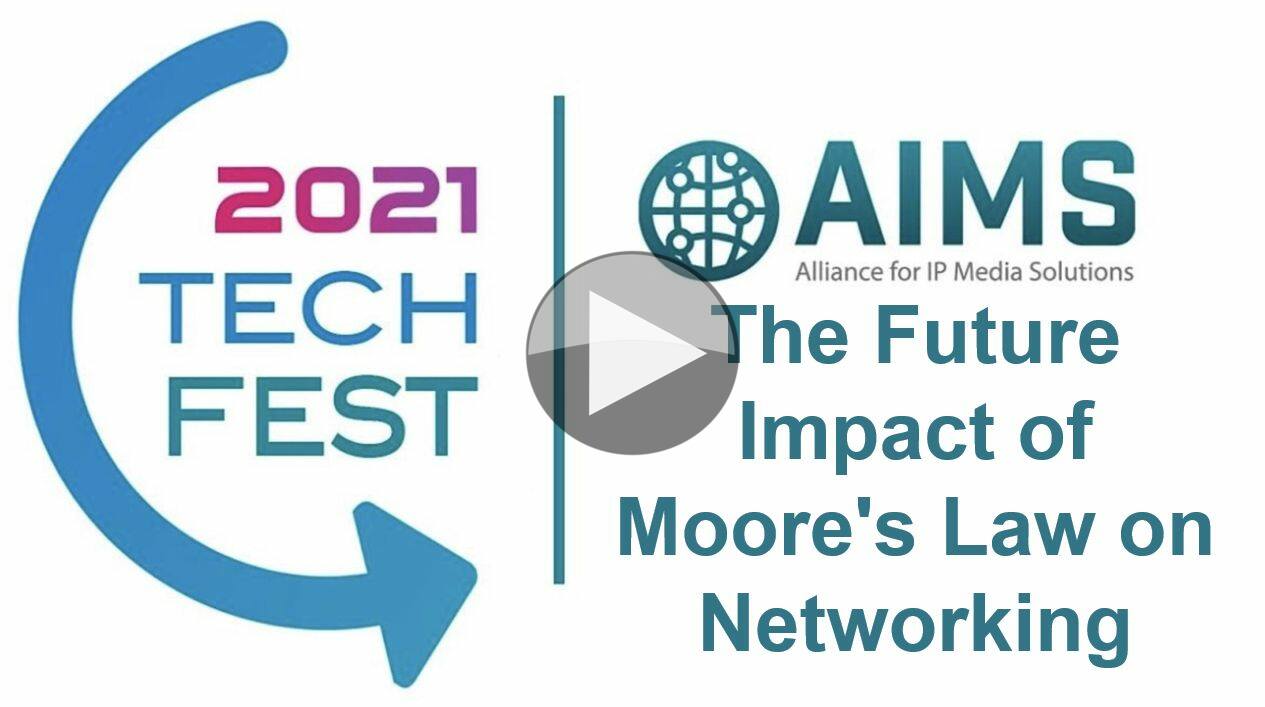 Many feel that Moore’s law has lost its way when it comes to CPUs since we’re no longer seeing a doubling of chip density every two years. This change is tied to the difficulty in shrinking transistors even more when their size is already close to some of the limits imposed by physics. In the networking world, transistors are bigger so which is allowing significant growth in bandwidth to continue. In recent years we have tracked the rise of 1GbE which made way for 10GbE, 40GbE and 100 Gigabit networking. We’re now seeing general availability of 400Gb with 800Gb firmly on the near-term roadmaps as computation within SFPs and switches increases.

In this presentation, Arista’s Robert Welch and Andy Bechtolsheim, explain how the 400GbE interfaces are made up, give insight into 800GbE and talks about deployment possibilities for 400GbE both now and in the near future harnessing in-built multiplexing. It’s important to realise that high capacity links we’re used to today of 100GbE or above are delivered by combining multiple lower-bandwidth ethernet links, known as lanes. 4x25GbE gives a 100GbE interface and 8x50GbE lanes provides 400GbE. The route to 800GbE is, then to increase the number of lanes or bump the speed of the lanes. The latter is the chosen route with 8x100GbE in the works for 2022/2023.

One downside of using lanes is that you will often need to break these out into individual fibres which is inconvenient and damages cost savings. Robert outlines the work being done to bring wavelength multiplexing (DWDM) into SFPs so that multiple wavelengths down one fibre are used rather than multiple fibres. This allows a single fibre pair to be used, much simplifying cabling and maintaining compatibility with the existing infrastructure. DWDM is very powerful as it can deliver 800GB over distances of over 5000km or 1.6TB for 1000km, It also allows you to have full-bandwidth interconnects between switches. Long haul SFPs with DWDM built in are called OSFP-LS transceivers.

Cost per bit is the religion at play here with the hyperscalers keenly buying into the 400Gb technology because this is only twice-, not four-, times the price of the 100Gb technology it’s replacing. The same is true of 800Gb. The new interfaces will run the ASICs faster and so will need to dissipate more heat. This has led to two longer form factors, the OSFP and QSFP-DD. The OSFP is a little larger than the QSFP but an adaptor can be used to maintain QSFP-form factor compatibility.

Andy explains that 800Gb Ethernet has been finished by the Ethernet Technology Alliance and is going into 51,2t silicon which will allow channels of native 800Gb capacity. This is somewhat in the future, though and Andy says that in the way 25G has worked well for us the last 5 years, 100gig is where the focus is for the next 5. Andy goes on to look at what future 800G chassis might loo like saying that in 2U you would expect 64 800G OSFP interfaces which could provide 128 400G outputs or 512 100G outputs with no co-packaged optics required. 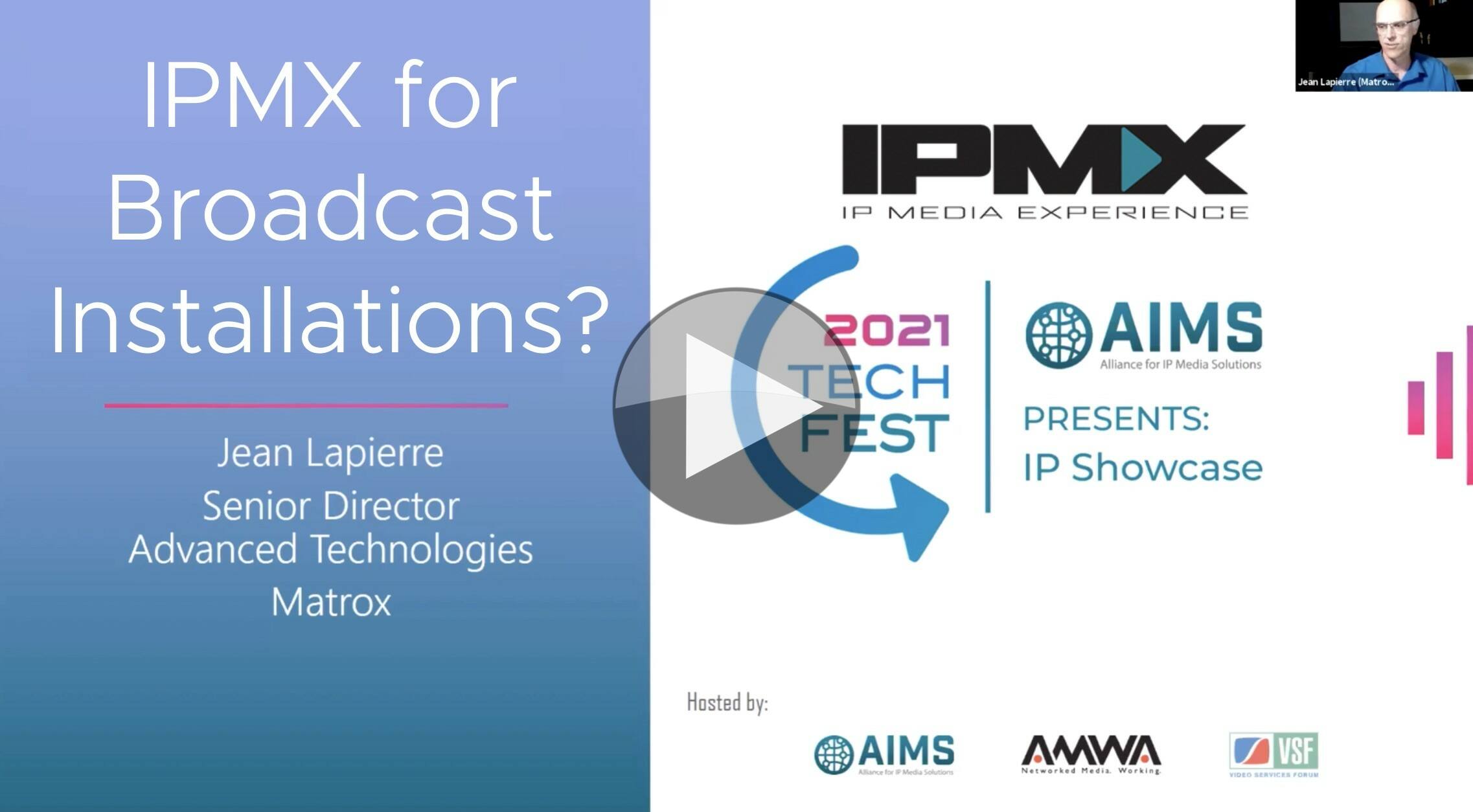 IPMX, the new ProAV IP challenger spec, is taking shape promising to tame SMPTE’s ST 2110 standards, make PTP useable and extend AMWA into managing HDCP. Is this a tall order and can it actually deliver? Taking us through the ins and out is Jean Lapierre from Matrox.

With or without IPMX, ProAV is moving to IP whether with SDVoE, ZeeVee or something else. There are a number of competing technologies, but we hear from Jean that IPMX is the only software-defined one. This is important because if you don’t require a chip to be an IPMX product and participate in ProAV workflows, then anything can support IPMX such as PCs, Laptops and mobile phones.

IPMX based on RTP, ST 2110, ST 2059 PTP and AMWA specifications IS-04, IS-05, IS-08 (audio channel mapping), IS-11 for EDID handling as well as NMOS security and best practice guidance. This seems like a lot, but to cover media transfer, registration, control, security and interfacing with display screens, this is the range of tech needed.

Compared to SMPTE ST 2110, the PTP profile is easier to deploy and produces less traffic, explains Jean, and IPMX even works without PTP which support for asynchronous signals. Support of HDCO is included along with a lower-latency FEC mode for those that find 2022-7 too costly or impractical to deploy. Lastly, Jean points out that thanks to the in-built support for JPEG XS, IPMX can support UHD workflows within a 1GbE infrastructure.

Jean continues by discussing the compatibility between 2110 and IPMX. In principle IPMX and 2110 senders and receivers are interchangeable. Jean goes into more detail, but the example would be that IPMX is managing the HDCP encryption of the source using AMWA NMOS IS-11. IS-11 is, naturally available to be used with any other technology including ST 2110. If it’s adopted, then HDCP-protected material can flow between the two systems.