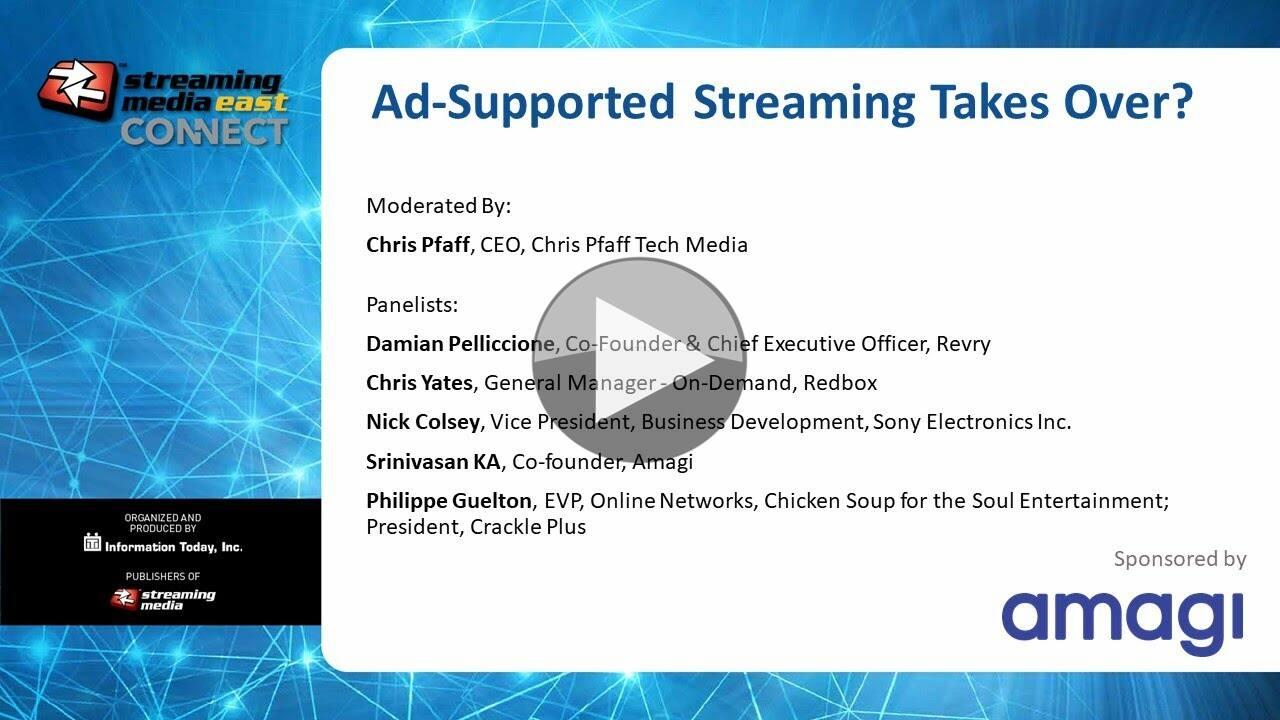 FAST, SVOD and AVOD are all different ways to bring programming to viewers with different costs to the viewer. All delivered over the internet, FAST is a service that unites live, linear TV with a VOD service whereas AVOD only has video on demand. Both FAST and AVOD are free to watch thanks to adverts whereas SVOD is usually advert-free as this is subscriber VOD where you pay monthly. This video from Streaming Media discusses the rise of FAST and its importance in the market.

‘Is niche content key?’ askes moderator Chris Pfaff to Damian Pelliccione from Revry. Damian distances his service from niche as it serves the over 5% of the US population who identify as LGBTQ+ or similar, Despite not being niche, in common with niche channels, Revry’s content is not typically provided by the mainstream and has a very deep meaning to those watching. because they are working with an underserved demographic, they feel FAST is much more appropriate than SVOD as equal access is important. However, Damian is at pains to point out that, in reality, the service is a ‘tribrid’ of FAST, AVOD and SVOD. Revry’s marketing has moved to buying hero units to position itself on smart TVs and STBs in pole position and also aligning its brand outside of the streaming market such as associating with pride festivals. One advantage of FAST is the cost of user is far lower than SVOD which can be in the realms of $9 per user.

One of the motivators for Sony to start its BRAVIA brand of smart TVs was, Nick Colsey explains, to enable people to access niche streaming services to supplement the mainstream linear channels. This was done through a menu of apps, much like mobile computing, each one a window into a different walled garden. Now, Sony integrates streaming services into the same EPG as linear which shows that convergence continues unabated, in common with ATSC 3.0’s indifference to delivery method. Nick views Sony as a ‘Switzerland’ of content aggregation as it has no conflict of interest given it doesn’t run a rival service.

Chris Yates from Redbox says that FAST channels work well for them as they site well alongside customers’ other SVOD bundles remaining highly accessible. Finding customers, Chris states is harder than it used to be and now the gatekeepers are increasingly equipment manufacturers. Getting yourself on Sony TVs or Samsung equipment is a major vector for exposure but is not always practical. Chris says that rather than competing with youtube, it’s more general than that, he sees Redbox competing for leisure time. Asked later in the session, Chris says he sees consolidation on the horizon for both studios and streaming services.

Amagi’s Srinivasan KA is pleased to claim that they deliver up to 45% of all content on FAST platforms. He sees FAST as growing because it’s more demographic than cable without the need to get 100 services when only 2 would do. And those 2 channels can go much deeper into a topic than mainstream channels would. Not only can you go into a topic deeper, but with more choice of topics, you can go deeper into discovering, understanding and following up your own interests.

Philippe Guelton from Crackle explains their efforts to create programmes differently whether live drama or close-to live. He feels innovation is important and is one way to deal with companies who are spending ‘too much money on streaming, implying they are loss-leaders and therefore ripe for acquisition. 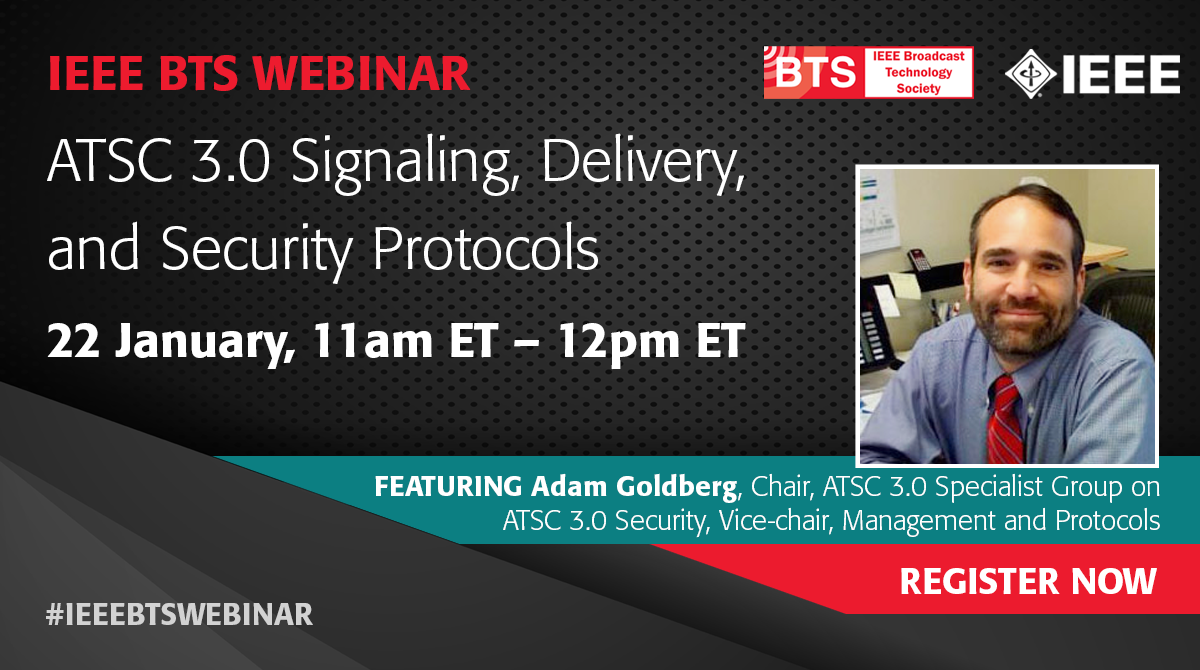 ATSC 3.0 is bringing IP delivery to terrestrial broadcast. Streaming data live over the air is no mean feat, but nevertheless can be achieved with standard protocols such as MPEG DASH. The difficulty is telling the other end what’s its receiving and making sure that security is maintained ensuring that no one can insert unintended media/data.

In the second of this webinar series from the IEEE BTS, Adam Goldberg digs deep into two standards which form part of ATSC 3.0 to explain how security, delivery and signalling are achieved. Like other recent standards, such as SMPTE’s 2022 and 2110, we see that we’re really dealing with a suite of documents. Starting from the root document A/300, there are currently twenty further documents describing the physical layer, as we learnt last week in the IEEE BTS webinar from Sony’s Luke Fay, management and protocol layer, application and presentation layer as well as the security layer. In this talk Adam, who is Chair of a group on ATSC 3.0 security and vice-chair one on Management and Protocols, explains what’s in the documents A/331 and A/360 which between them define signalling, delivery and security for ATSC 3.0.

Security in ATSC 3.0
One of the benefits of ATSC 3.0’s drive into IP and streaming is that it is able to base itself on widely developed and understood standards which are already in service in other industries. Security is no different, using the same base technology that secure websites use the world over to achieve security. Still colloquially known by its old name, SSL, the encrypted communication with websites has seen several generations since the world first saw ‘HTTPS’ in the address bar. TLS 1.2 and 1.3 are the encryption protocols used to secure and authenticate data within ATSC 3.0 along with X.509 cryptographic signatures.

Authentication vs Encryption
The importance of authentication alongside encryption is hard to overstate. Encryption allows the receiver to ensure that the data wasn’t changed during transport and gives assurance that no one else could have decoded a copy. It provides no assurance that the sender was actually the broadcaster. Certificates are the key to ensuring what’s called a ‘chain of trust’. The certificates, which are also cryptographically signed, match a stored list of ‘trusted parties’ which means that any data arriving can carry a certificate proving it did, indeed, come from the broadcaster or, in the case of apps, a trusted third party.

Signalling and Delivery
Telling the receiver what to expect and what it’s getting is a big topic and dealt with in many places with in the ATSC 3.0 suite. The Service List Table (SLT) provides the data needed for the receiver to get handle on what’s available very quickly which in turn points to the correct Service Layer Signaling (SLS) which, for a specific service, provides the detail needed to access the media components within including the languages available, captions, audio and emergency services.

Media delivery is achieved with two technologies. ROUTE (Real-Time Object Delivery over Unidirectional Transport ) which is an evolution of FLUTE which the 3GPP specified to deliver MPEG DASH over LTE networks. and MMTP (Multimedia Multiplexing Transport Protocol) an MPEG standard which, like MPEG DASH is based on the container format ISO BMFF which we covered in a previous video here on The Broadcast Knowledge

Register now for this webinar to find out how this all connects together so that we can have safe, connected television displaying the right media at the right time from the right source!