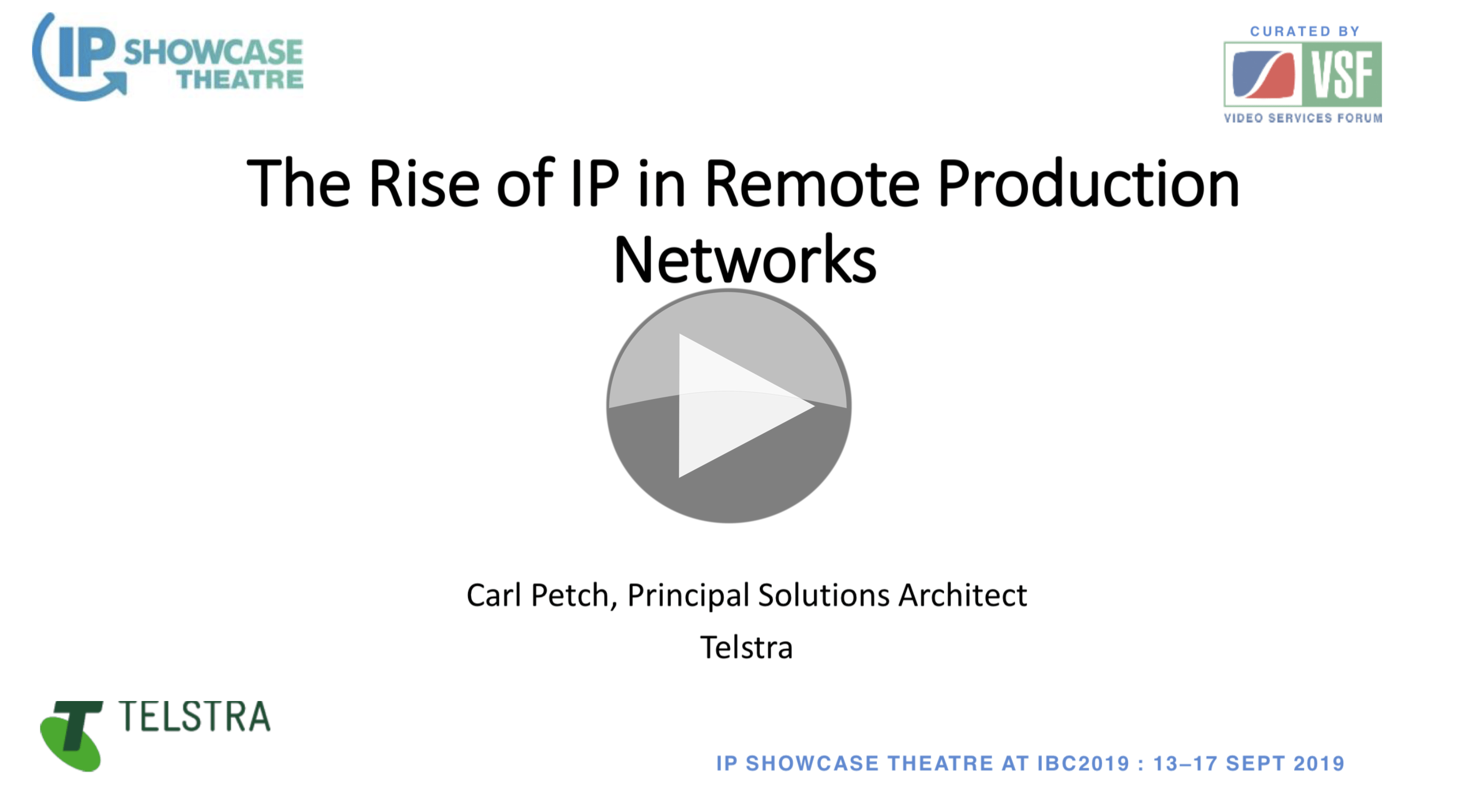 Like all good ideas, remote production is certainly not new. Known in the US as REMIs (REmote INtegrations) and in Europe as Remote Productions, producing live events without sending people there has long been seen as something to which most broadcasters have aspired. We’re now at a tipping point of available techniques, codecs and bandwidth which is making large-scale remote production practical and, indeed, common.

Carl Petch took to the podium at the IBC 2019 IP Showcase to explain how telco Telstra have been deploying remote production solutions by looking at three case studies including the Pyeongchang 2018 Winter Olympics, and the technology behind them. Highlighting TICO, SMPTE ST 2022-6 uncompressed and VC-2 compression, previously known as the BBC’s DIRAC, we see how codecs are vital in underpinning successful, low latency, remote production.

Encoding and decoding delay aren’t the only delays to consider, simple propagation time for the signal to travel from one place on the earth to another have to be considered – including the lengths of your different paths – so Carl takes us through a table of real-world measurements between a range of places showing up to 280ms one-way delay.

Much of the success Telstra has had in delivering these solutions has been anchored on their dedicated remote production network based on the Open Transport Network principles which allows them to carve up parts of their bandwidth for different protocols which Carl covers in some detail and allows them to scale in 100Gb increments.

JPEG XS is a brand-new, ultra-low latency standard delivering JPEG 2000 quality with 1000x lower latency; microseconds instead of milliseconds. This mezzanine compression standard promises compression ratios of up to 10:1, resolutions of up to 8K plus HDR and features frame rates from 24 to 120 fps.

Jean-Baptiste Lorent from intoPIX shows how JPEG-XS can be used with SMPTE ST-2110 stack. Part -22 of ST 2110 allows for transport of compressed video essence as an alternative to uncompressed essence – all the other elementary streams stay the same, just the video RTP payload changes. This approach saves a lot of bandwidth and keeps all the existing advantages of moving from SDI to IP at the same time.

Based on TICO which arrived in products four or more years ago allowing HD products to support UHD workflows, JPEG XS was also designed for visually lossless quality and maintaining that quality over multiple re-encoding stages. The combination of very-low microsecond-latency and relatively low bandwidth makes it ideal for remote production of live events. 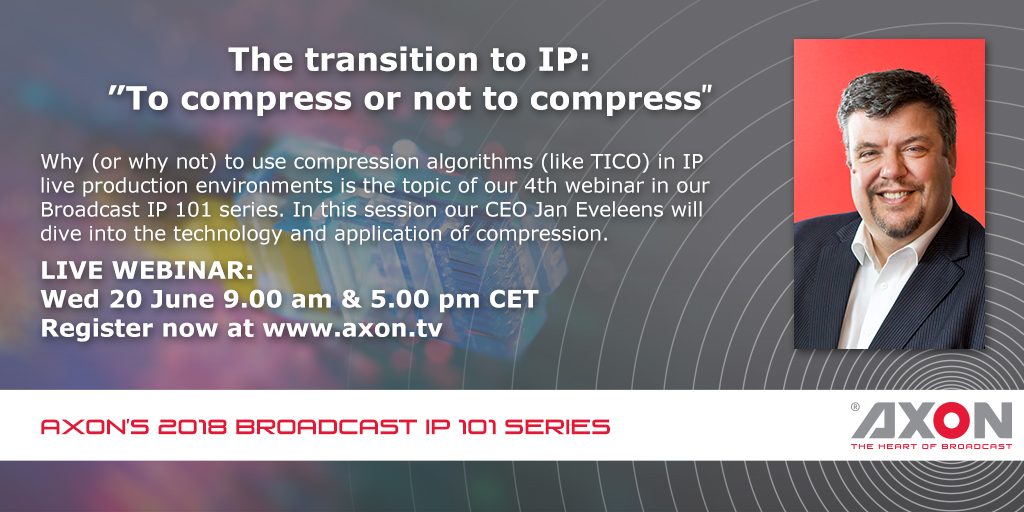 Webinar: 20th June 2018 at 08:00 BST and 16:00 BST
Axon continue their IP 101 webinar series by looking at when to use compression like TICO and when not to. CEO Jan Eveleens will dive into the technology and application of compression covering the basic principles of compression, the mechanisms behind it and the reasons for using it.

This webinar will be presented twice on 20th June. Register now
Have a look at the previous webinars:
Transport Formats Demystified
Key Ingredients & Standards
Prepare for IP

Broadcasters are increasingly considering IP as the next step in their workflows and operations, attracted by the potential of greater agility, flexibility and efficiency. As an industry we have finally built a consensus on a common IP standard and are forging ahead with the SMPTE ST 2110 suite of standards. However, there are more challenges to conquer when moving to an IP broadcast infrastructure.