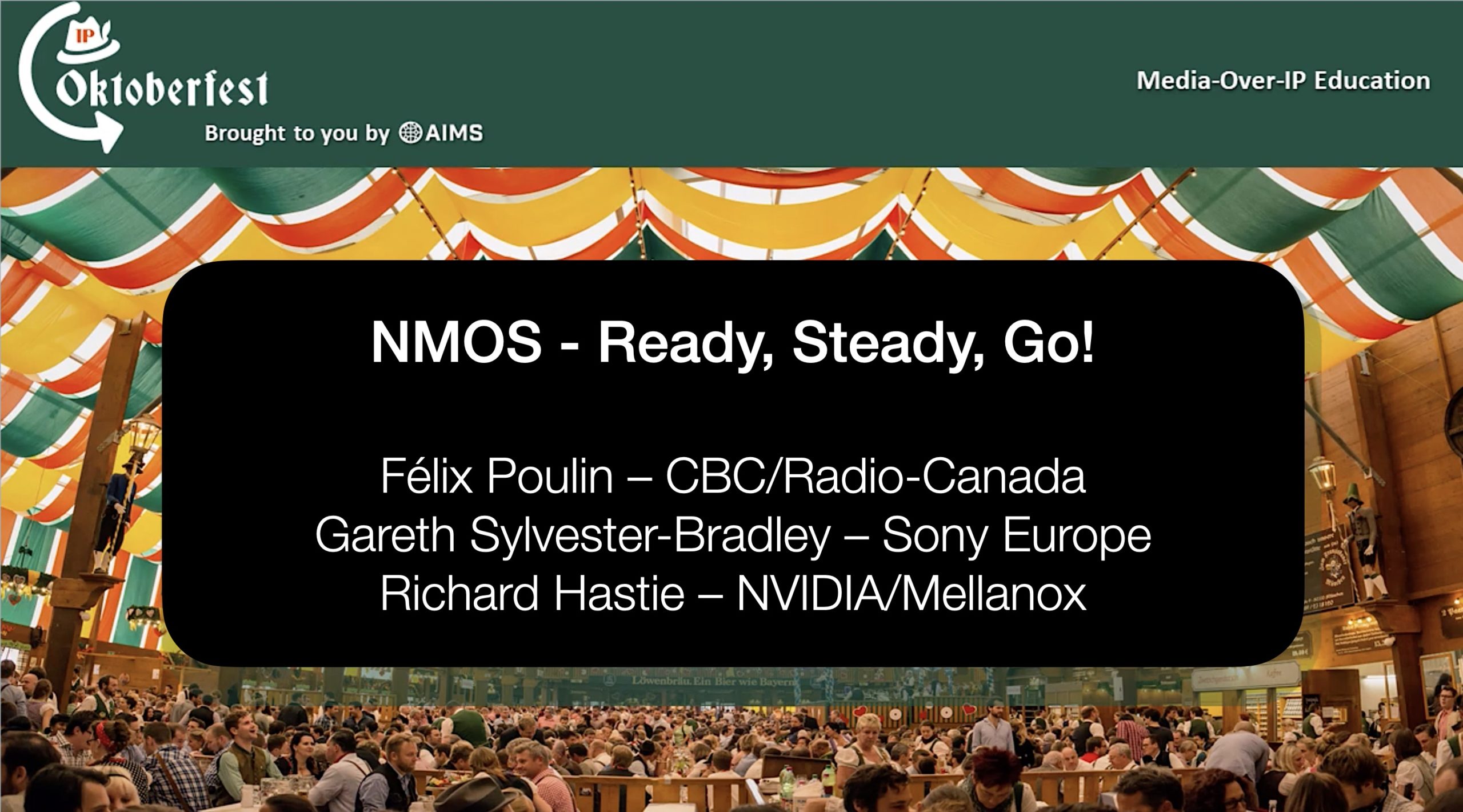 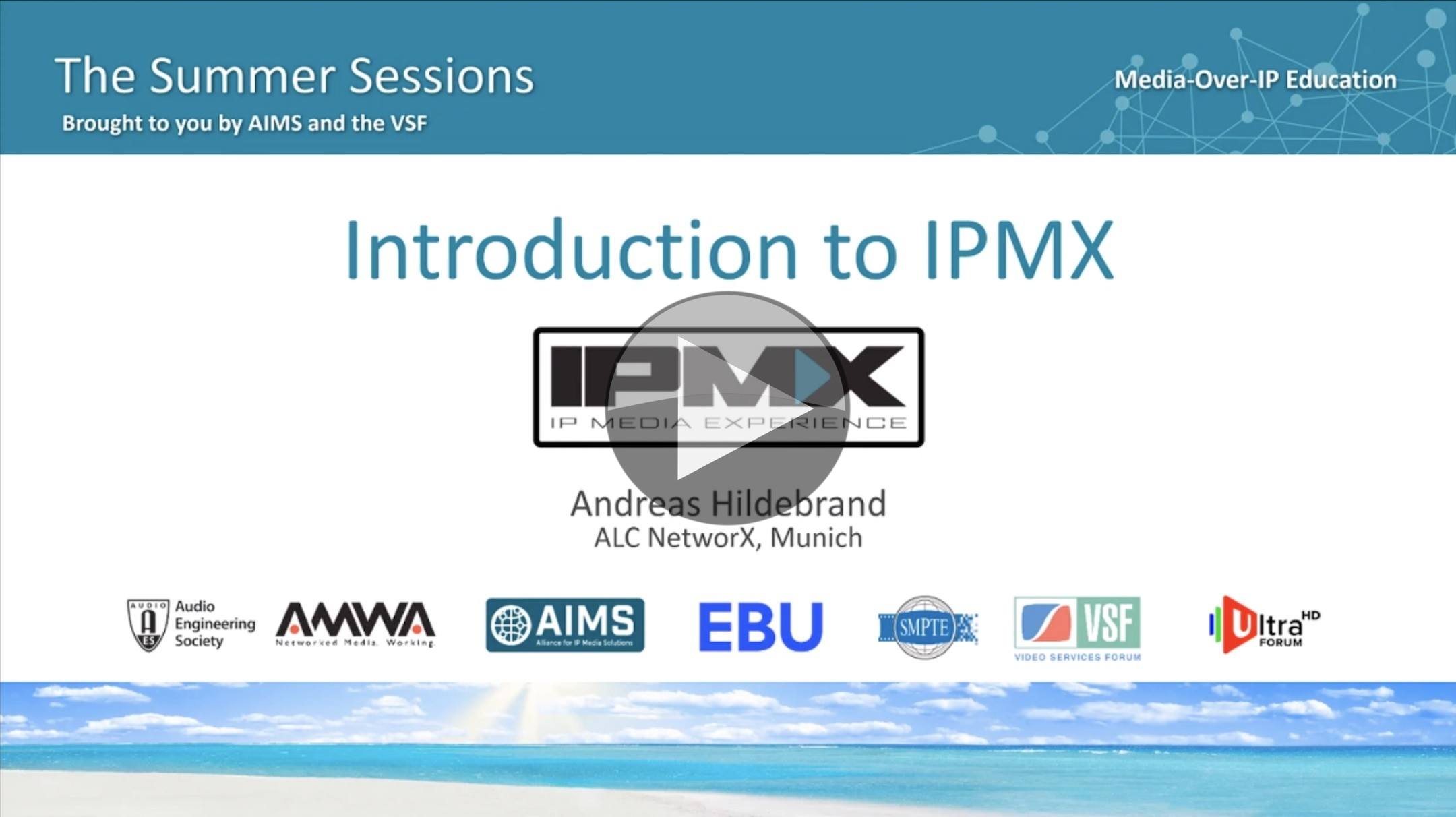 The Broadcast Knowledge has documented over 100 videos and webinars on SMPTE ST 2110. It’s a great suite of standards but it’s not always simple to implement. For smaller systems, many of the complications and nuances don’t occur so a lot of the deeper dives into ST 2110 and its associated specifications such as NMOS from AMWA focus on the work done in large systems in tier-1 broadcasters such as the BBC, tpc and FIS Skiing for SVT.

ProAV, the professional end of the AV market, is a different market. Very few companies have a large AV department if one at all. So the ProAV market needs technologies which are much more ‘plug and play’ particularly those in the events side of the market. To date, the ProAV market has been successful in adopting IP technology with quick deployments by using heavily proprietary solutions like ZeeVee, SDVoE and NDI to name a few. These achieve interoperability by having the same software or hardware in each and every implementation.

IPMX aims to change this by bringing together a mix of standards and open specifications: SMPTE ST 2110, NMOS specs and AES. Any individual or company can gain access and develop a service or product to meet them.

Andreas gives a brief history of IP to date outlining how AES67, ST 2110, ST 2059 and the IS specifications, his point being that the work is not yet done. ProAV has needs beyond, though complementary to, those of broadcast.

AES67 is already the answer to a previous interoperability challenge, explains Andreas, as the world of audio over IP was once a purely federated world of proprietary standards which had no, or limited, interoperability. AES67 defined a way to allow these standards to interoperate and has now become the main way audio is moved in SMPTE 2110 under ST 2110-30 (2110-31 allows for AES3). Andreas explains the basics of 2110, AES, as well as the NMOS specifications. He then shows how they fit together in a layered design.

Andreas brings the talk to a close looking at some of the extensions that are needed, he highlights the ability to be more flexible with the quality-bandwidth-latency trade-off. Some ProAV applications require pixel perfection, but some are dictated by lower bandwidth. The current ecosystem, if you include ST 2110-22’s ability to carry JPEG-XS instead of uncompressed video allows only very coarse control of this. HDMI, naturally, is of great importance for ProAV with so many HDMI interfaces in play but also the wide variety of resolutions and framerates that are found outside of broadcast. Work is ongoing to enable HDCP to be carried, suitably encrypted, in these systems. Finally, there is a plan to specify a way to reduce the highly strict PTP requirements. 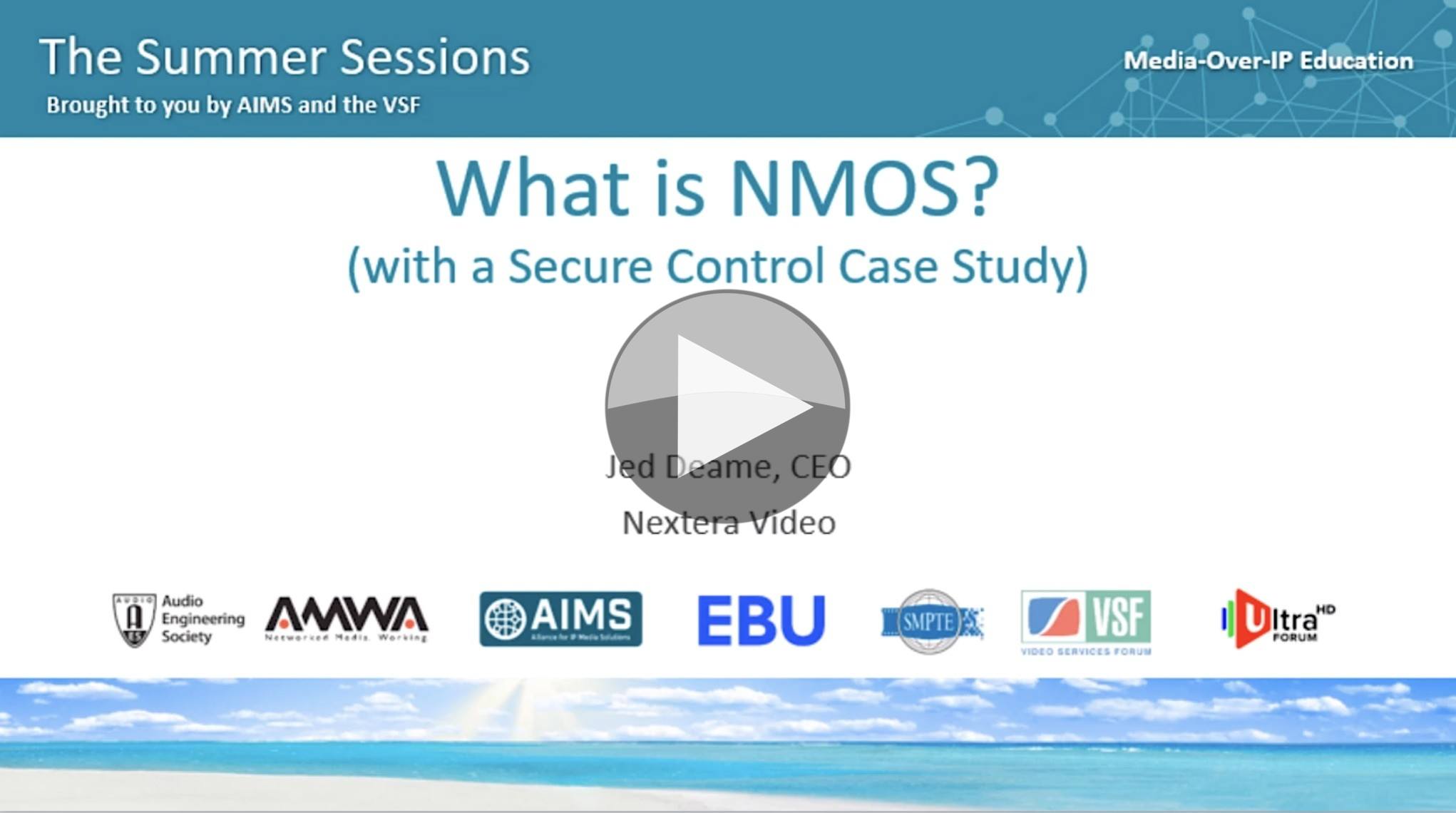 Once you’ve implemented SMPTE ST 2110‘s suite of standards on your network, you’ve still got all your work ahead of you in order to implement large-scale workflows. How are you doing to discover new devices? How will you make or change connections between devices? How will you associate audios to the video? Creating a functioning system requires an whole ecosystem of control protocols and information exchange which is exactly what AMWA, the Advanced Media Workflow Association has been working on for many years now.

Jed Deame from Nextera introduces the main specifications that have been developed to work hand-in-hand with uncompressed workflows. All prefixed with IS- which stands for ‘Interface Specificaion’, they are IS-04, IS-05, IS-08, IS-09 and IS-10. Between them they allow you to discover new devices, create connections between then, manage the association of audio with video as well as manage system-wide information. Each of these, Jed goes through in turn. The only relevant ones which are skipped are IS-06 which allows devices to communicate northbound to an SDN controller and IS-07 which manages GPI and tally information.

Jed sets the scene by describing an example ST-2110 setup with devices able to join a network, register their presence and be quickly involved in routing events. He then looks at the first specification in today’s talk, NMOS IS-04. IS-04’s job is to provide an API for nodes (cameras, monitors etc.) to use when they start up to talk to a central registry and lodge some details for further communication. The registry contains a GUID for every resource which covers nodes, devices, sources, flows, senders and receivers. IS-04 also provides a query API for controllers (for instance a control panel).

While IS-04 started off very basic, as it’s moved to version 1.4, it’s added HTTPS transport, paged queries and support for connection management with IS-05 and IS-06. IS-04 is a foundational part of the system allowing each element to have an identity, track when entities are changes and update clients accordingly.

IS-05 manages connections between senders and receivers allowing changes to be immediate or set for the future. It allows, for example, querying of a sender to get the multicast settings and provides for sending that to a receiver. Naturally, when a change has been made, it will update the IS-04 registry.

IS-08 helps manage the complexity which is wrought by allowing all audios to flow separately from the video. Whilst this is a boon for flexibility and reduces much unnecessary processing (in extracting and recombining audio) it also adds a burden of tracking which audios should be used where. IS-08 is the answer from AMWA on how to manage this complexity. This can be used in association with BCP-002 (Best Current Practice) which allows for essences in the IS-04 registry to be tagged showing how they were grouped when they were created.

Jed looks next at IS-09 which he explains provides a way for global facts of the system to be distributed to all devices. Examples of this would be whether HTTPS is in use in the facility, syslog servers, the registration server address and NMOS versions supported.

Security is the topic of the last part of talk. As we’ve seen, IS-04 already allows for encrypted API traffic, and this is mandated in the EBU’s TR-1001. However BCP 003 and IS-10 have also been created to improve this further. IS-10 deals with authorisation to make sure that only intended controllers, senders and receivers are allowed access to the system. And it’s the difference between encryption (confidentiality) and authorisation which Jed looks at next.

It’s no accident that security implementations in AMWA specifications shares a lot in common with widely deployed security practices already in use elsewhere. In fact, in security, if you can at all avoid developing your own system, you should avoid it. In use here is the PKI system and TLS encryption we use on every secure website. Jed steppes through how this works and the importance of the cipher suite which lives under TLS.

The final part of this talk is a case study where a customer required encrypted control, an authorisation server, 4K video over 1GbE, essence encryption, unified routing interface and KVM capabilities. Jed explains how this can all be achieved with the existing specifications or an extension non top of them. Extending the encryption methods for the API to essences allowed them to meet the encryption requirements and adding some other calls on top of the existing NMOS provided a unified routing interface which allowed setting modes on equipment. 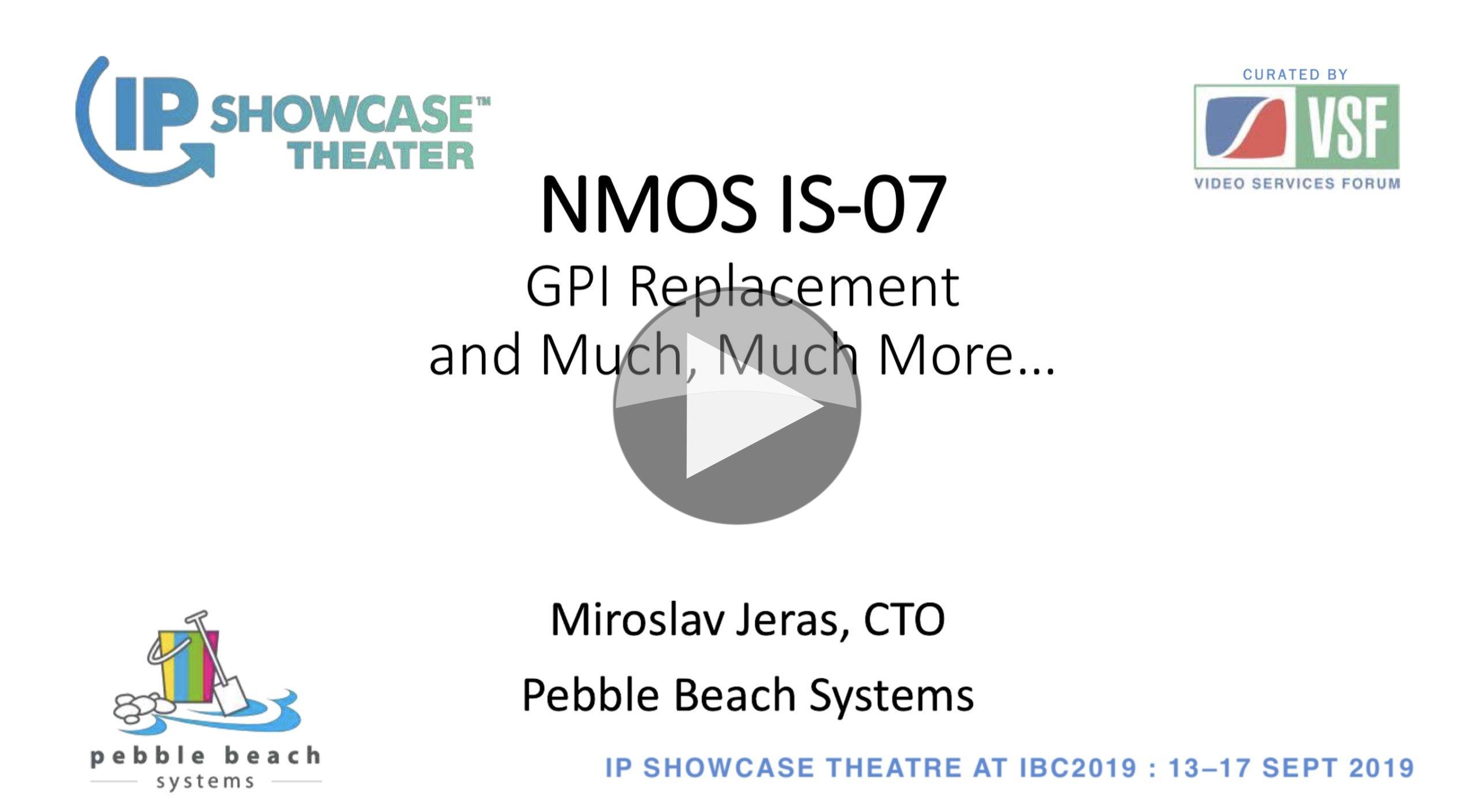 GPI was not without its complexities, but the simplicity of its function in terms of putting a short or a voltage on a wire, is unmatched by any other system we use in broadcasting. So the question here is, how do we do ‘GPI’ with IP given all the complexity, and perceived delay, in networked communication. CTO of Pebble Beach, Miroslav Jeras, is here to explain.

The key to understanding the power of the new specification for GPI from NMOS called IS-07 is to realise that it’s not trying to emulate DC electronics. Rather, by adding the timing information available from the PTP clock, the GPI trigger can now become extremely accurate – down to the audio sample – meaning you can now use GPI to indicate much more detailed situations. On top of that, the GPI messages can contain a number of different data types, which expands the ability of these GPI messages and also helps interoperability between systems.

Miroslav explains the ways in which these messages are passed over the network and how IS-07 interacts with the other specifications such as IS-05 and BCP-002-01. He explains how IS-07 was used in the Techno Project – tpc, Zurich and then takes us through a range of different examples of how IS-07 can be used including synchronisation of the GUI and monitoring as well as routing based on GPI.