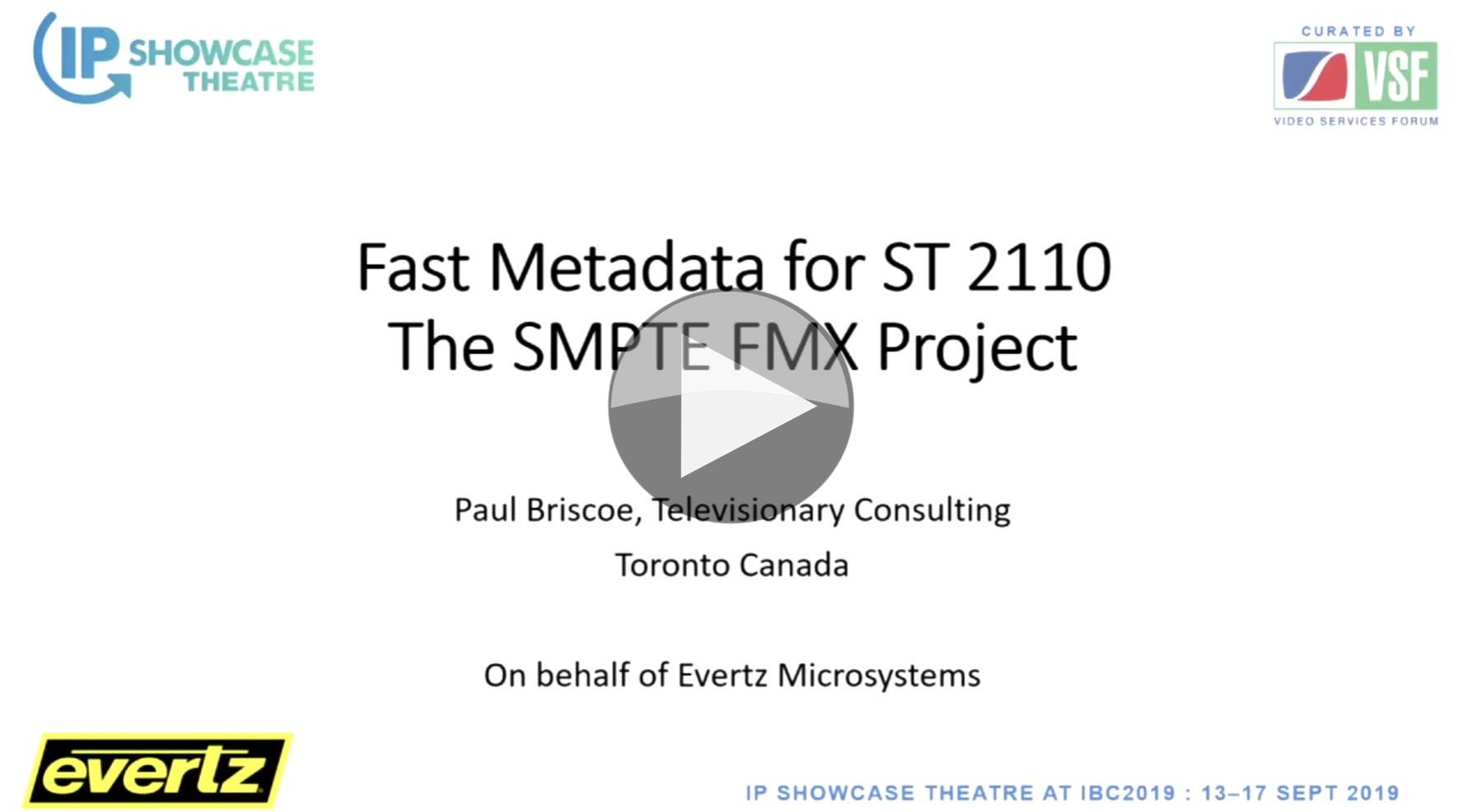 Why would you decode 12Gbps of data in order to monitor for an occasional SCTE switching signal or closed captions? SMPTE 2110 separates video, audio and metadata freeing up workflows to be more flexible. But so far, SMPTE 2110 only defines how to take the metadata used in SDI under SMPTE 291. The point of freeing up workflows is to allow innovation, so this talk looks at SMPTE ST 2110-41 which allows for more types of data to be carried, time synchronised with the other essences.

Paul Briscoe joins us at the podium to explain why we need to extend SMPTE ST 2110-40 beyond SDI-compatible metadata. He starts by explaining how ST 2110 was intended to work well with SDI. Since SDI already has a robust system for Ancillary Data (ANC Data), it made sense for 2110 to support that first in a 100% compatible way. One of the key characteristics of metadata is that it’s synchronised to the other media and we expect the decoders to be selective over what it acts on, explains Paul. The problem that he sees, however is that if you wanted to send some XML, JSON or other data which has never been included in the SDI signal, there is no way to send that within 2110 and keep the synchronisation. To prove his point, Paul puts up the structure of ST-291M in 2110-40 which still has references to lines and horizontal offsets. Furthermore, he points out that future 2110 workflows aren’t going to need to be tied to SDI-compatible metadata.

The Fast Metadata (FMX) proposal is to allow arbitrary metadata streams which can be time-aligned with a media stream. It would provide a standardised encoding method, be extensible, minimise IP address use and retain the option of being interoperable with ST 291 if needed.

Having chosen the KLV data structure, which is well known and scalable, SMPTE provides for this to be delivered with a timestamp and even early so that processing can be done ahead of time. This opens the door to carrying XMl, JSON and other data structure.

Paul explains how this has been implemented as an RTP stream hence using the RTP timestamps. Within the stream there are blobs of data. Paul explains the structure of a blob and how payloads which are smaller than a blob, as well as those which are larger, can be dealt with. Buffering and SDPs need to be supported, after all, this is a 2110 stream.

After doing into the detail of 2110-41, Paul explains there is a 2110-42 standard which can carry technical metadata about the stream. It provides in-band messaging of important stream details but is not intended to replace IS-04 or SDPs.

Find out more and Watch now!
Download the presentation
Speakers 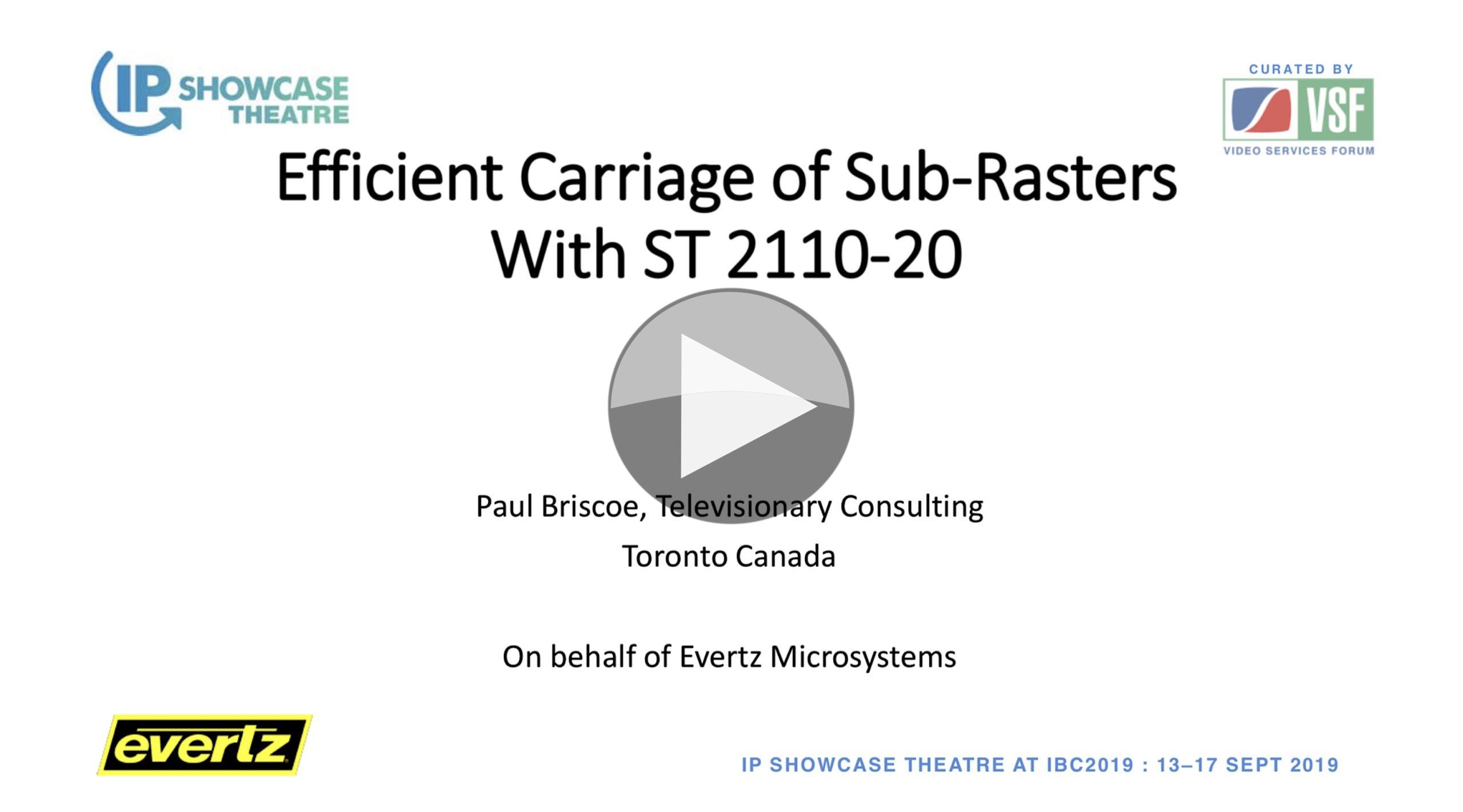 One of the main promises of IP video is flexibility and what better way to demonstrate that than stepping off the well-worn path of broadcast resolutions? 1920×1080 is much loved nowadays, but not everything needs to be put into an HD-sized frame. SMPTE ST-2110 allows video of all shapes and sizes, so let’s not be afraid to use the control given to us.

Paul Briscoe, talking on behalf of Evertz, takes the podium to explain the idea. Using logo insertion as an expample, he shows that if you want to put a small BUG/DOG/graphic on screen with a key, then real there’s not a lot of data that needs to be transferred. Typically a graphic needs a key and a fill. Whilst the key is typically luma-only, the fill needs to be full colour.

In the world of SDI, sending your key and fill around would need two whole HD signals and up to 6Gbps of data. When your graphic is only a small logo, these SDI signals are mainly redundant data. Using ST 2110-20, however, in the IP domain we can be much more efficient. 2110 allows resolutions up to 32,000 pixels square so we should be able to send just the information which is necessary.

Paul introduces the idea of a “pixel group” (pgroup) which is the minimal group of video data samples that make up an integer number of pixels and also align to an octet boundary. Along with defining a size, we also get to define an X,Y position. Paul explains how using pgroups helps, and hinders, sending video this way and then delves in to how timing would work. To finish off, Paul examines edge cases and talks about other examples such as stock tickers, not to mention the possibility of motion as we get to define the X, Y position.

Watch now!
This wall chart gives more info on pgroups and other low-level ST 2110-20 constructs.
Download the slides from this presentation 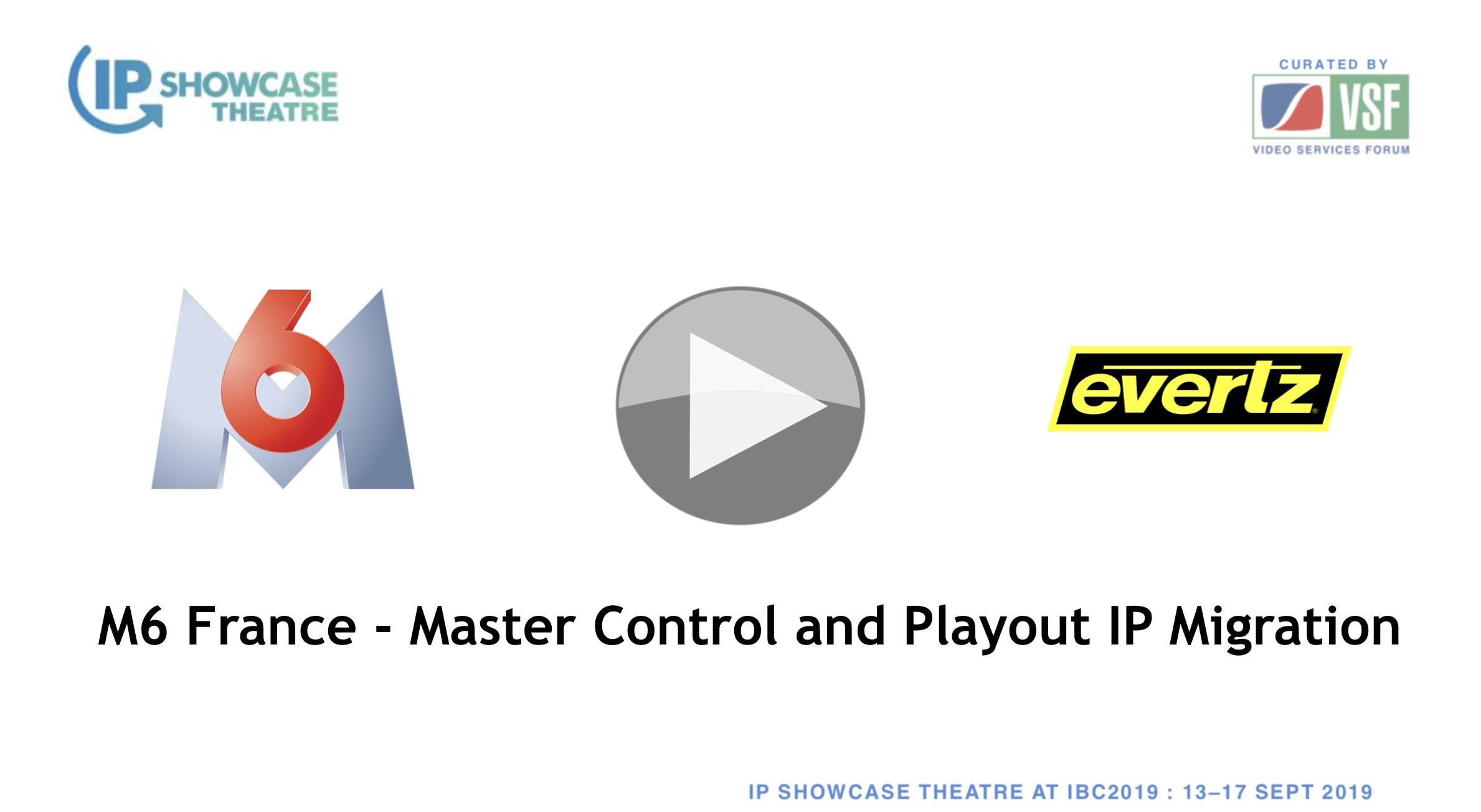 French broadcast company M6 Group has recently moved to an all-IP workflow, employing the SMPTE ST 2110 suite of standards for professional media delivery over IP networks. The two main playout channels and MCR have been already upgraded and the next few channels will be transitioned to the new core soon.

The M6 system comprises equipment from five different vendors (Evertz, Tektronix, Harmonic, Ross and TSL), all managed and controlled using the AMWA NMOS IS-04 and IS-05 specifications. Such interoperability is an inherent feature of SMPTE ST 2110 suite of standards allowing customers to focus on the operational workflows and flexibility that IP brings them. Centralised management and configuration of the system is provided through web interfaces which also allows for easy and automated addition of a new equipment.

Thanks to Software Defined Orchestration and intuitive touch screen interfaces information such as source paths, link bandwidth / status, and device details can be quickly accessed via a web GUI. As the system is based on IP network, it is possible to come in and out of fabric numerous times without the same costs implications that you would have in the SDI world. Every point of the signal chain can be easily visualised which enables broadcast engineers to maintain and configure the system with ease. 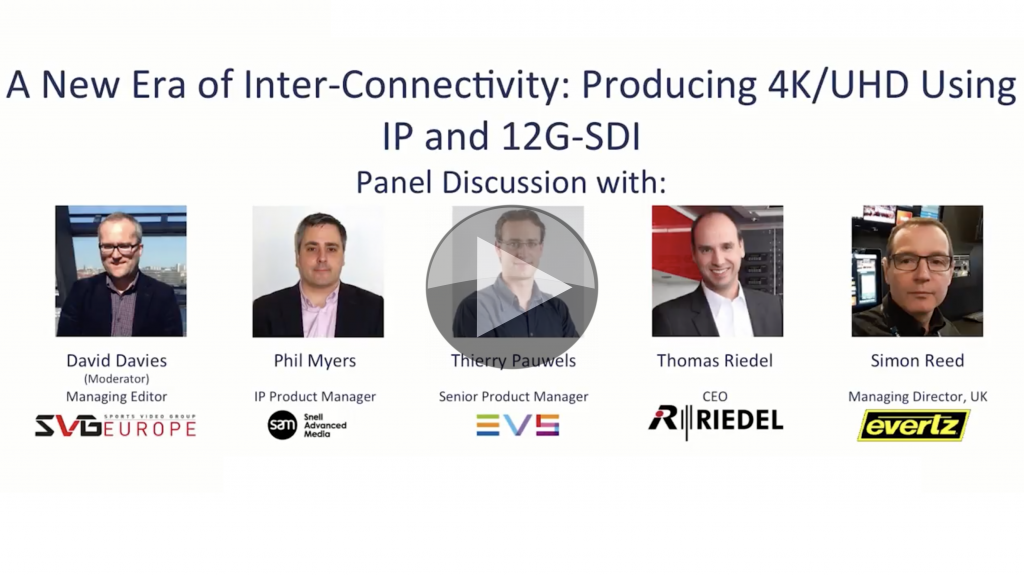