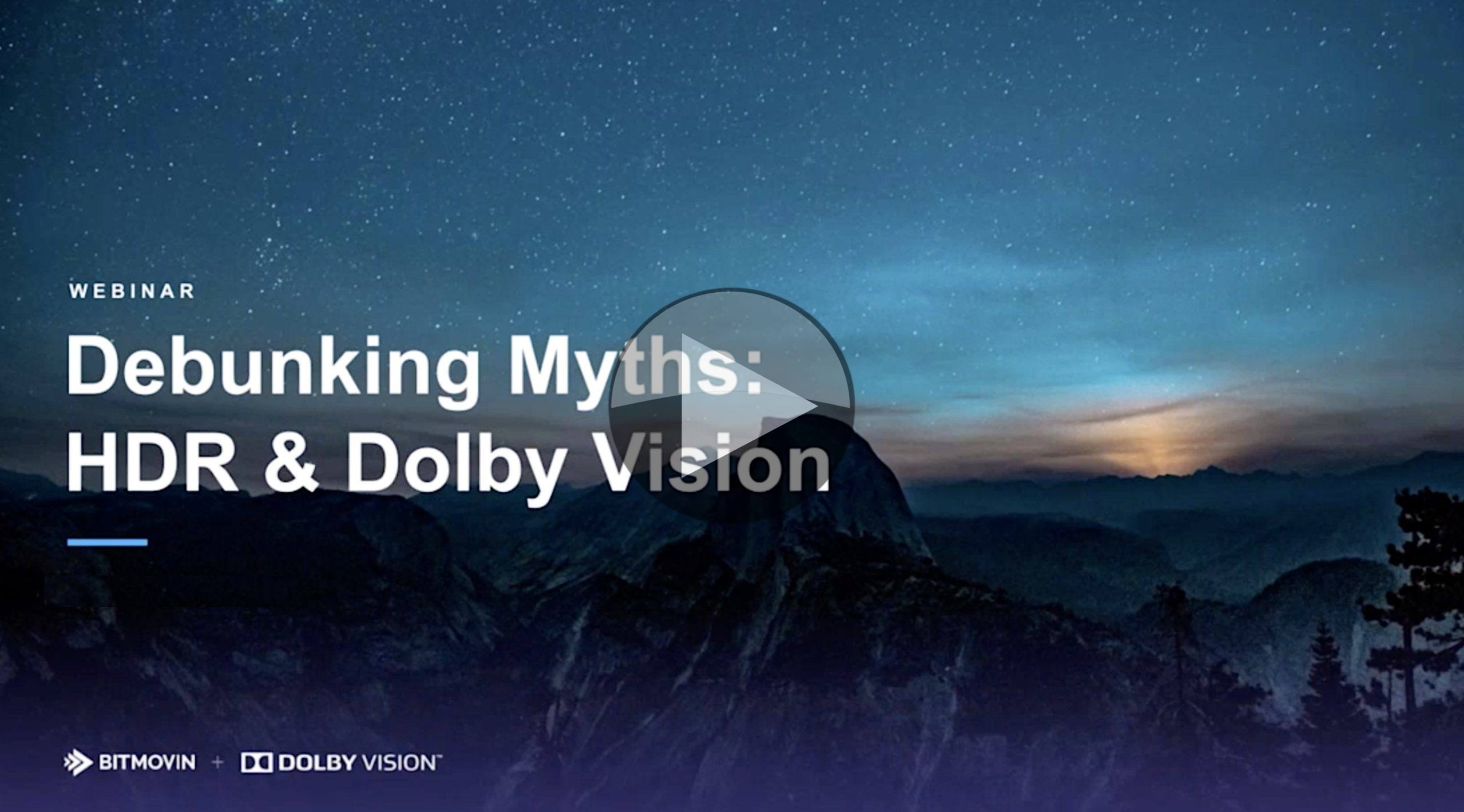 There seem no let up in the number of technologies coming to market and whilst some, like HDR, have been slowly advancing on us for many years, the technologies that enable them such as Dolby Vision, HDR10+ and the metadata handling technologies further upstream are more recent. So it’s no surprise that there is some confusion over what’s possible and what’s not.

In this video, Bitmovin and Dolby the truth behind 5 myths surrounding the implementation and financial impact of Dolby Vision and HDR in general. Bitmovin sets the scene by with Sean McCarthy giving an overview on their research into the market. He explains why quality remains important, simply put to either keep up with competitors or be a differentiator. Sean then gives an overview of the ‘better pixels’ principle underlining that improving the pixels themselves is often more effective than higher resolution, technologies such as wide colour gamut (WCG) and HDR.

David Brooks then explains why HDR looks better, explaining the biology and psychology behind the effect as well as the technology itself. The trick with HDR is that there are no extra brightness values for the pixels, rather the brightness of each pixel is mapped onto a larger range. It’s this mapping which is the strength of the technology, altering the mapping gives different results, ultimately allowing you to run SDR and HDR workflows in parallel. David explains how HDR can be mapped down to low-brightness displays,

The last half of this video is dedicated to the myths. Each myth has several slides of explanation, for instance, the one suggests that the workflows are very complex. Hangen Last walks through a number of scenarios showing how dual (or even three-way) workflows can be achieved. The other myths, and the questions at the end, talk about resolution, licensing cost, metadata, managing dual SDR/HDR assets and live workflows with Dolby Vision. 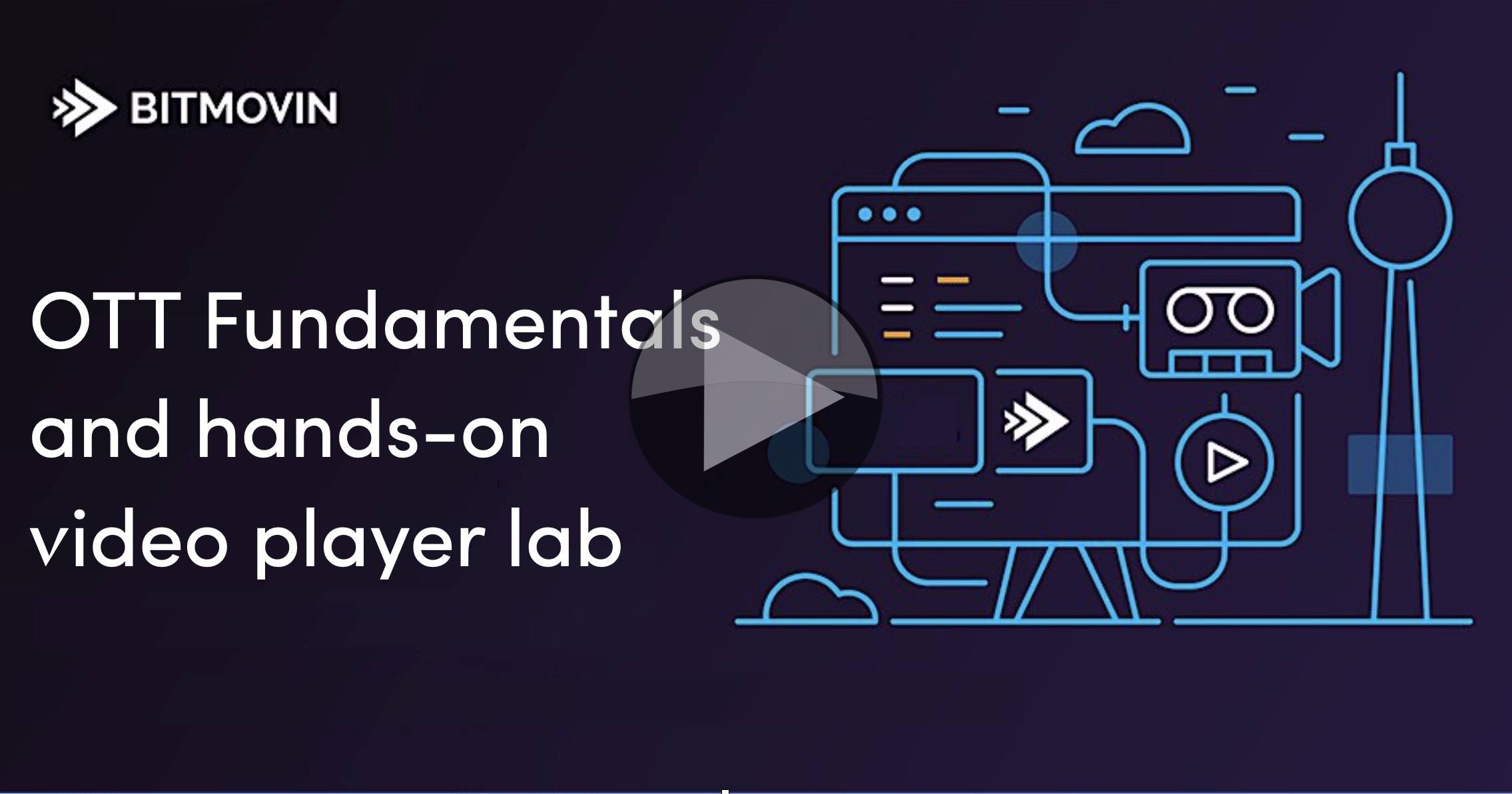 Whilst there are plenty of videos explaining the basics streaming, few of them talk you through the basics of actually implementing a video player on your website. The principles taught in this hands-on Bitmovin webinar are transferable to many players, but importantly at the end of this talk you’ll have your own implementation of a video player which you can make in real time using their remix project at glitch.com which allows you to edit code and run it immediately in the browser to see your changes.

Ahead of the tutorial, the talk both explains the basics of compression and OTT led by Kieran Farr, Bitmovin’s VP of marketing and Andrea Fassina, Developer Evangelist. Andrea outlines a simplified OTT architecture where he looks at the ‘ingest’ stage which, in this example, is getting the videos from Instagram either via the API or manually. It then looks at the encoding step which compresses the input further and creates a range of different bitrates. Andrea explains that MPEG standards such as H.264, H.265 are commonly used to do this making the point that MPEG standards typically require royalty payments. This year, we are expecting to see VVC released by MPEG (H.266).

Andrea then explains the relationship between resolution, frame rate and file sizes. Clearly smaller files are better as they require less time to download leading to quicker downloads so faster startup times. Andrea discusses how the resolutions match the display resolutions with TVs having 1920×1080 resolution or 2160×3840 resolution. Given that higher resolutions have more picture detail, there is more information to be sent leading to larger file sizes.

When you come to set up your transcoder and player, there are a number of options you need to set. These are determined by these basics, so before launching into the code, Andrea looks further into the fundamental concepts. He next looks at video compression to explain the ways in which compression is achieved and the compromises within. Andrea starts from the first MJPEG codecs where each frame was its own JPEG image and they simply animated from one JPEG to another to show the video – not unlike animated GIFs used on the internet. However by treating each frame on its own ignores a lot of compression opportunity. When looking at one frame to the next, there are a lot of parts of the image which are the same or very similar. This allowed MPEG to step up their efforts and look across a number of frames to spot the similarities. This is typically referred to as temporal compression as is it uses time as part of the process.

In order to achieve this, MPEG splits all frames into blocks, squares in AVC, which are called macro blocks which be compared between frames. They then have 3 types of frame called ‘I’, ‘P’ and ‘B’ frames. The I frames have a complete description of that frame, similar to a JPEG photograph. P frames don’t have a complete description of the frame, rather they some blocks which have new information and some information saying that ‘this block is the same as this block in this other frame. B frames have no complete new image parts, but create the frame purely out of frames from the recent future and recent past; the B stands for ‘bi-directional’.

Ahead of launching into the code, we then look at the different video codecs available. He talks about AVC (discussed in detail here), HEVC (detailed in this talk) and compares the two. One difference is HEVC uses much more flexible macro block sizes. Whilst this increases computational complexity, it reduces the need to send redundant information so is an important part of the achieving the 50% bitrate reduction that HEVC typically shows over AVC. VP9 and AV1 complete the line-up as Andrea gives an overview of which platforms can support these different codecs. 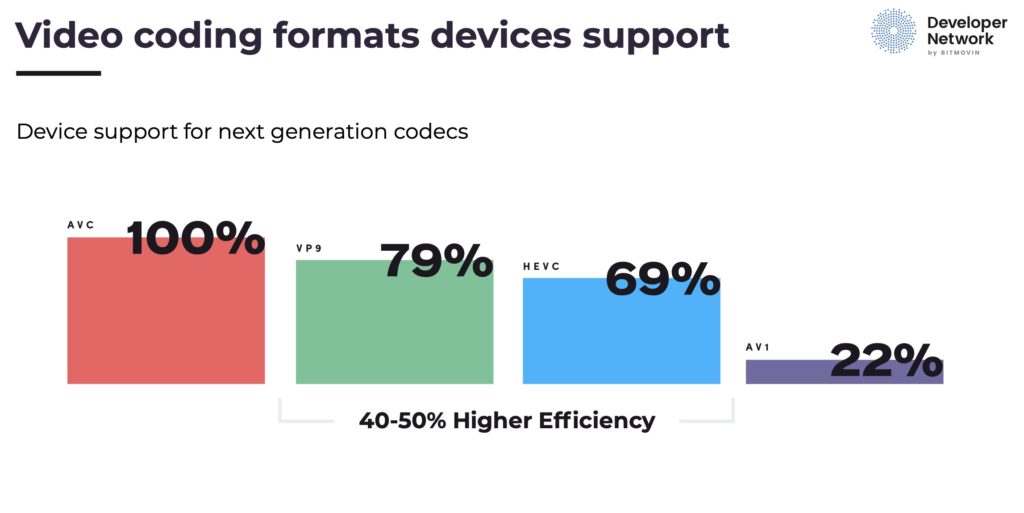 Andrea then introduces the topic of Adaptive bitrate, ABR. This is vital in the effective delivery of video to the home or mobile phones where bandwidth varies over time. It requires creating several different renditions of your content at various bitrates, resolutions and even frame rate. Whilst these multiple encodes put a computational burden on the transcode stage, it’s not acceptable to allow a viewer’s player to go black, so it’s important to keep the low bitrate version. However there is a lot of work which can go into optimising the number and range of bitrates you choose.

Lastly we look at container formats such as MP4 used in both HLS and MPEG-DASH and is based on the file format ISO BMFF. Streaming MP4 is usually called fragmented MP4 (fMP4) as it is split up into chunks. Similarly MPEG2 Transport Streams (TS files) can be used as a wrapper around video and audio codecs. Andrea explains how the TS file is built up and the video, audio and other data such as captions are multiplexed together.

The last half of the video is the hands-on section during which Andrea talks us through how to implement a video player in realtime on the glitch project allowing you to follow along and do the same edits, seeing the results in your browser as you go. He explains how to create a list of source files, get the player working and styled correctly.

The important aspects of writing and developing streaming apps aren’t always clear to the beginner and adding video to apps high on the list for many companies. This can be a very simple menu of videos to delivering premium content for paid subscribers. This webinar is perfect for web developers, independent coders, creative agencies, students and anyone who has a basic understanding of programming concepts but little-to-zero knowledge of video development.

In this talk, Bitmovin Developer Evangelist, Andrea Fassina and Technical Product Marketing Manager, Sean McCarthy will share a variety of lessons learned, on topics such as: 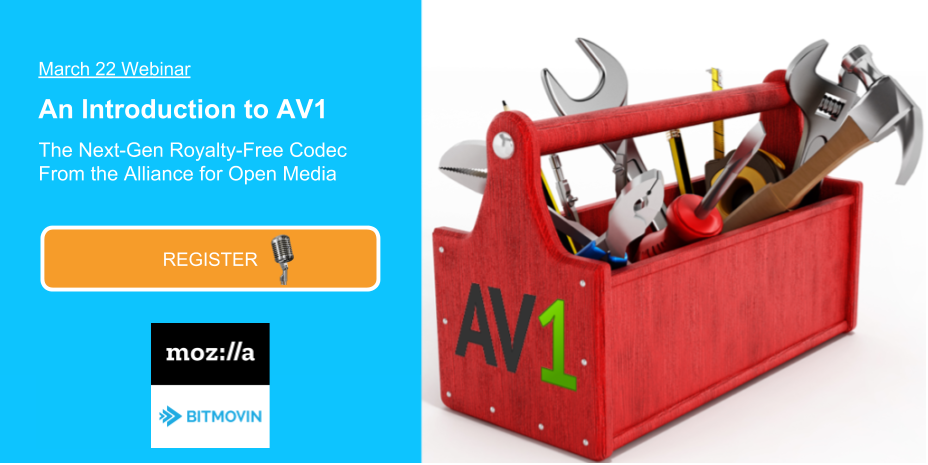 Now that AV1 has entered its final stage of development and is getting close to finalising its features, it’s a good time to take a closer look at what’s in store for the future of video streaming.

Join Bitmovin and Mozilla – the two companies behind the world’s first AV1 playback with HTML5 – as we discover the cool new video tools in this royalty-free video codec from the Alliance for Open Media!

This webinar will cover:
+ A bit about the history that led to AV1 and the current state of the codec
+ Discover the cool new tools in AV1 brings and compare performance relative to other codecs
+ Review what’s already possible and what to expect next

Register for the live webinar!