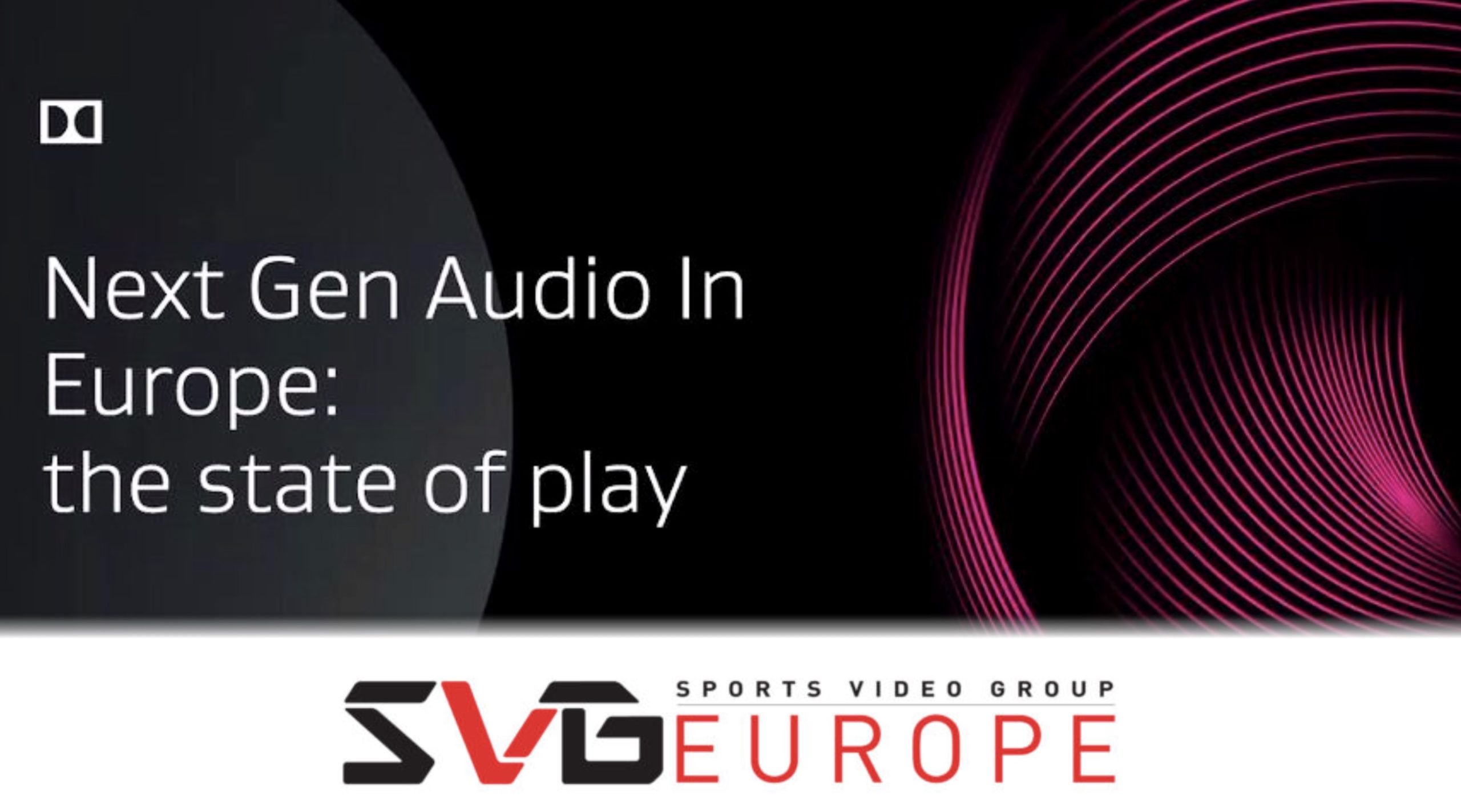 Next-generation audio refers to a range of new technologies which allow for immersive audio like 3D sound, for increased accessibility, for better personalisation and anything which delivers a step-change in the lister experience. NGA technologies can stand on their own but are often part of next-generation broadcast technologies like ATSC 3.0 or UHD/8K transmissions.

This talk from the Sports Video Group and Dolby presents one case study from a few that have happened in 2020 which delivered NGA over the air to homes. First, though, Dolby’s Jason Power brings us up to date on how NGA has been deployed to date and looks at what it is.

Whilst ‘3D sound’ is an easy to understand feature, ‘increased personalisation’ is less so. Jason introduces ideas for personalisation such as choosing which team you’re interested in and getting a different crowd mix dependant on that. The possibilities are vast and we’re only just starting to experiment with what’s possible and determine what people actually want or to change where your mics are, on the pitch or in the stands.

What can I do if I want to hear next-generation audio? Jason explains that four out of five TVs are now shipping with NGA audio and all of the five top manufacturers have support for at least one NGA technology. Such technologies are Dolby’s AC-4 and sADM. AC-4 allows delivery of Dolby Atmos which is an object-based audio format which allows the receiver much more freedom to render the sound correctly based on the current speaker set up. Should you change how many speakers you have, the decoder can render the sound differently to ensure the ‘stereo’ image remains correct.

To find out more about the technologies behind NGA, take a look at this talk from the Telos Alliance.

Next, Matthieu Parmentier talks about the Roland Garros event in 2020 which was delivered using sADM plus Dolby AC-4. sADM is an open specification for metadata interchange, the aim of which is to help interoperability between vendors. The S-ADM metadata is embedded in the SDI and then transported uncompressed as SMPTE 302M.

ATEME’s Mickaël Raulet completes the picture by explaining their approach which included setting up a full end-to-end system for testing and diagnosis. The event itself, we see, had three transmission paths. An SDR satellite backup and two feeds into the DVB-T2 transmitter at the Eiffel Tower.

The session ends with an extensive Q&A session where they discuss the challenges they faced and how they overcame them as well as how their businesses are changing. 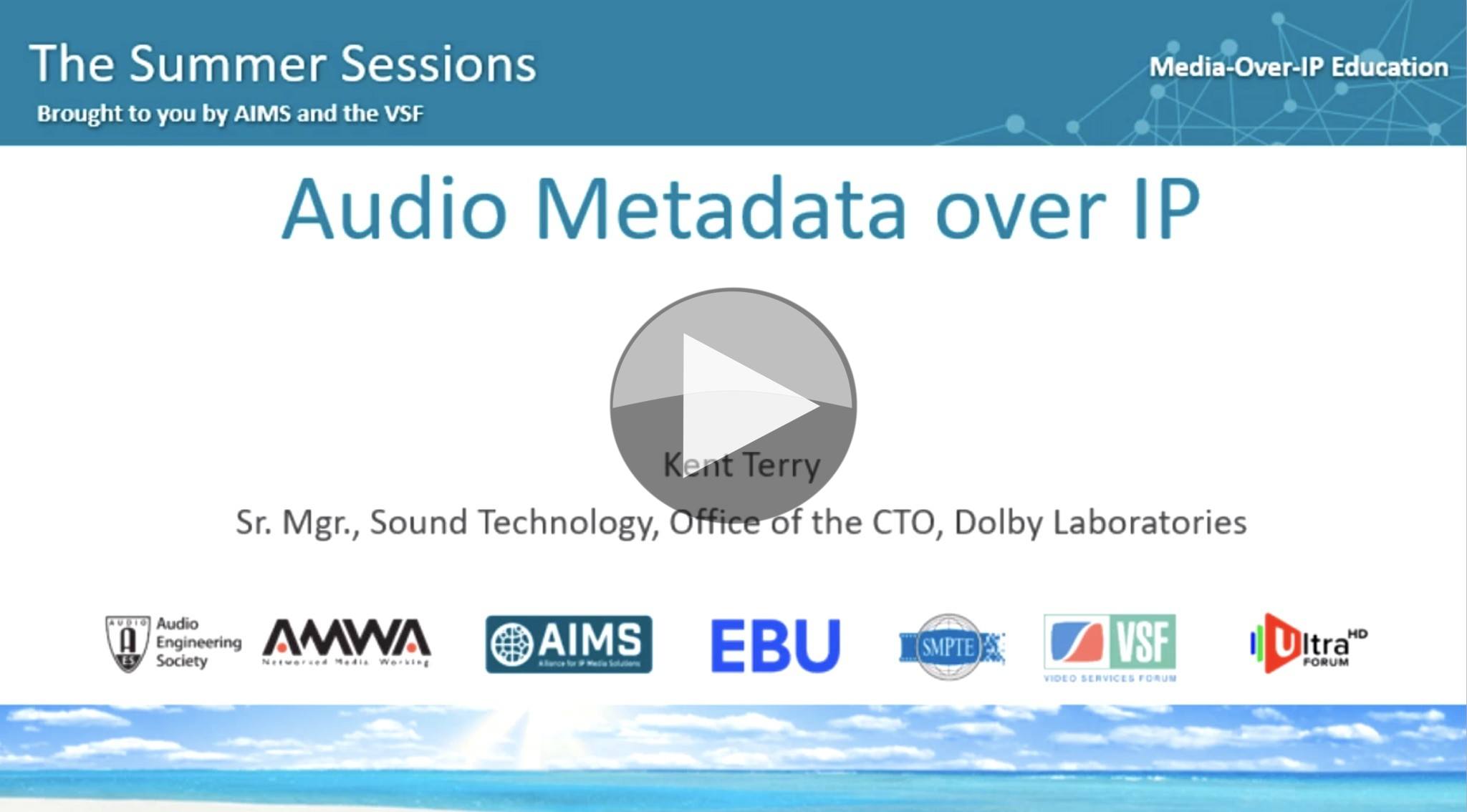 Next-Generation Audio is gradually becoming this generation’s audio as new technologies seep into the mainstream. Dolby Atmos is one example of a technology which is being added to more and more services and which goes way beyond stereo and even 5.1 surround sound. But these technologies don’t just rely on audio, they need data, too to allow the decoders to understand the sound so they can apply the needed processing. It’s essential that this data, called metadata, keeps in step with the audio and, indeed, that it gets there in the first place.

Dolby have long used metadata along with surround sound to maintain the context in which the recording was mastered. There’s no way for the receiver to know what maximum audio level the recording was mixed to without being told, for instance. With NGA, the metadata needed can be much more complex. With Dolby Atmos, for example, the audio objects need position information along with the mastering information needed for surround sound.

Kent Terry from Dolby laboratories joins us to discuss the methods, both current and future, that we can use to convey metadata from point to point in the broadcast chain. He starts by looking at the tried and trusted methods of carrying data within the audio of SDI. This is the way that Dolby E and Dolby D are carried, as data within what appears to be an AES 3 stream. There are two SMPTE standards for this in a sample-accurate fashion, ST 2109 and ST 2116.

SMPTE 2109 allows for metadata to be carried over an AES 3 channel using SMPTE ST 337, 337 being the standard which defines how to put compressed audio over AES 3 which would normally expect PCM audio data. This allows for any metadata at all to be carried. SMPTE ST 2116, similarly, defines metadata transport over AES3 but specifically for ITU-R BS.2125 and BS.2076 which define how to carry the Audio Definition Model.

The motivation for these standards is to enable live workflows which don’t have a great way of delivering live metadata. There are a few types of metadata which are worth considering. Static metadata, which doesn’t change during the programme such as the number of channels or the sample rate. Dynamic metadata such as spacial location and dialogue levels. And importantly optional metadata and required metadata, the latter being essential for the functioning of the technology.

Kent says that live productions are held back in their choice of NGA technologies by the limitations of metadata carriage and this is one reason that work is being done in the IP space to create similar standards for all-IP programme production.

For IP there are two approaches. The first is to define a way to send metadata separately to the AES67 audio which is found within SMPTE ST 2110-30, which is done with the new AES standard AES-X242. The other way being developed is using SMPTE 2110-41 which allows for any metadata (not solely ST 292) to be carried in a time-synchronised way with the other 2110 essences. Both of these methods, Kent explains are actively being developed and are open to input from users. 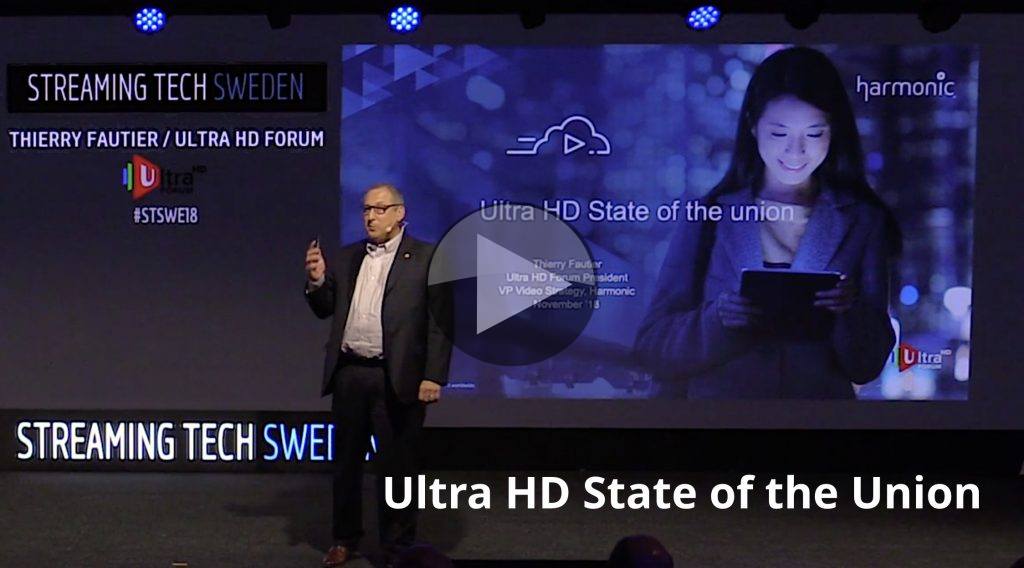 In some parts of the industry UHD is entirely absent. Thierry Fautier is here to shine a light on the progress being made around the globe in deploying UHD.

Thierry starts off by defining terms – important because Ultra HD actually hides several, often unmentioned, formats behind the term ‘UHD’. This also shows how all of the different aspects of UHD, which include colour (WCG), HDR, audio (NGA) and frame rate to name only a few, fit together.

There’s then a look at the stats, where is HDR deployed? How is UHD typically delivered? And the famed HDR Venn diagram showing which TVs support which formats.

As ever, live sports is a major testing ground so the talk examines some lessons learnt, and features a BBC case study, from the 2018 World Cup. Not unrelated, there is a discussion on the state of UHD streaming including discussion of CMAF.

Leading nicely onto Content Aware Encoding (CAE), which was also in use at the world cup. 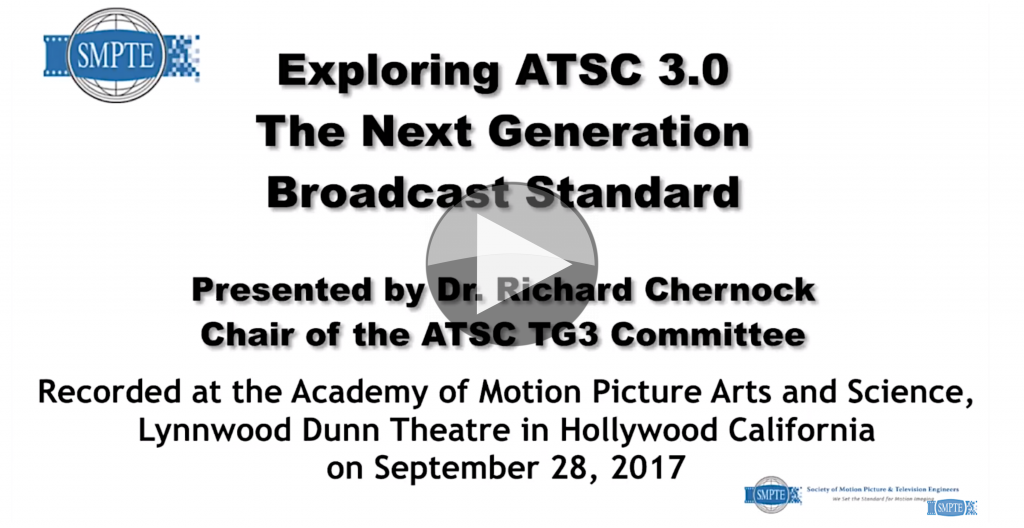 ATSC 3.0 is the next sea change in North American broadcasting, shared with South Korea, Mexico and other locations. Depending on your viewpoint, this could be as fundamental as the move to digital lockstep with the move to HD programming all those years ago.

ATSC 3.0 takes terrestrial broadcasting in to the IP world meaning everything transmitted over the air is done over IP and it brings with it the ability to split the bandwidth into separate pipes.

Here, Dr. Richard Chernock presents a detailed description of the available features within ATSC. He explains the new constellations and modulation properties delving into the ability to split your transmission bandwidth into separate ‘pipes’. These pipes can have different modulation parameters, robustness etc. The switch from 8VSB to OFDM allows for Single Frequency Networks which can actually help reception (due to guard intervals).

Additionally, the standard supports HEVC and scalable video (SHVC) whereby a single UHD encode can be sent which has an HD base-layer which can be decoded by every decoder plus an ‘enhancement layer’ which can be optionally decoded to produce a full UHD output for those decoders/displays which an support it.

With the move to IP, there is a blurring of broadcast and broadband. This can be used to deliver extra audios via broadband to be played with the main video and can be used as a return path to the broadcaster which can help with interactivity and audience measurement.